Tim Grant is the new director of the college Science Center. A bachelor, he requires the assistance of a hostess and hires Sophy Brandt, a widow in her sixties with a reputation for skillful entertaining and an organized household.

All goes well, except:

He cleared his throat and settled his tie…

“You’re a bachelor’s dream, you’re grand. It’s–it’s–boy, I feel like a heel to mention it, but it’s–I hate that yellow bang. Could you–would you–“

Her laugh was a hysterical mixture of mirth and tears.

“Is that all?” She unwound the length of printed silk on her head, snatched at her forehead, and pulled off the fringe of yellow hair…

The next evening when Tim entered the living room before dinner, for a startled instant he wondered whence the white-haired woman in the orchid-color frock?… A guest of Molly B.’s perhaps? She turned.

“Mrs. Sophy!… Those short, silvery curls all over your head are a knockout. Who performed the miracle?”

“Mildred, my onetime maid. Not much of a miracle. My hair has been like this for years, covered by what is known to the trade as a ‘piece.’ You said you hated the fringe, I thought you might be allergic to yellow hair, so off it came…”

Sophy, in her silver curls, is the hit of the evening.

“Sophy Brandt! What have you done to yourself?” from Tilly Farr. “Sophy, you’re a dream. You look years younger,” from Ingrid Johnson.

Bangs went in and out of fashion. When Emilie wrote Beckoning Trails, bangs were “in,” and pin-on bangs a ready accessory.

“Many a woman has yearned for bangs, yet has hesitated to cut her own hair… Whatever your reason, no need to deprive yourself any longer. Just pin on the bangs already waved or curled the way you want them.”

Emilie was fortunate to come of age when natural beauty was in, and her own assets were the style of the day. The year she married, reddish-brown hair like hers was the fashion, “smooth as satin it must be, and as glossy.”

In a mirror behind him she appraised herself as she might the drawing of a head.  Chestnut hair, natural wave, nice hairline, area from cheekbone to ear commended by artists…  lashes long, dark, gold-tipped, plenty of color in cheeks and lips—she was glad now that she had decided against make up.  On the whole, clean-cut type. As Long As I Live

Emilie’s hair never had to be crimped into curls.

“No, much as I longed to come to the wilderness I wouldn’t have dared had I not been born with a permanent wave.” Lighted Windows

Appreciative as she was of her natural assets, Emilie was also style-conscious and changed her look with the times.

“When the hair is parted in the middle there is just the suggestion of a short, wavy bang at either side of the part. This is extremely becoming to a certain type of face.” New York World, 1894

“The summer girl should pile her hair very high upon her head when she dons her evening gown. And the higher the comb she wears the more she is in fashion.” (1894)

There would be nothing more charming than the portrait of the Lady Claire… Chestnut hair piled high on a haughty head, eyes the velvety brown of pansies… Fair Tomorrow

“It is rumored that puffs will soon be worn again.” The puffs took the place of a bang, although they reached no more than a quarter-inch over the forehead. “The front hair will have the appearance of a series of deep, undulating waves.”

You might wonder why an author’s hairstyle would matter, when there was no electronic media. Never underestimate the descriptive skills of the newspapers!

Lillian A. North, who wrote for Harper’s Magazine, penned “Character in Hair” (1897), in which she described the hairstyles of her fellow authors and speculated as to whether their hairstyles indicated the women’s personalities. Curls inferred positive attributes; bangs, not so much. 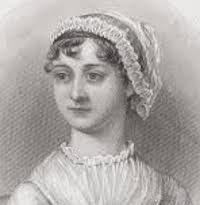 She noted that curls were generally “in favor” with women authors. Elizabeth Barrett Browning wore “a shower of dark curls, which enhanced the look of youthfulness” and Jane Austen’s “were the admiration of her friends who regretted her early adoption of the cap which English women still think it decorous to don at middle age.”

Mary Mapes Dodge (Hans Brinker, or the Silver Skates) wore the English bun, intriguingly introduced by “English gaity girls.”  “It is especially striking when worn on top, but it is not every face that will stand it.”

A bang, North observed, “seemed in part a concession to older and more extravagant styles of hair and numberless the women who adopted it and wear it still despite its tendency to die out of fashion’s grace.” Frances Hodgson Burnett (The Secret Garden) and the poet Louise Chandler Moulton wore theirs low, to cover their high foreheads. Sarah Orne Jewett (The Country of the Pointed Firs) adopted a parted wave instead.

Emilie Loring cared a lot about her characters’ hairstyles, and she made an example of Sophy Brandt. What was a woman to do when the full, richly-colored hair of youth gave way to thinning and graying?

When the middle-aged “cap” went out of style, Victorian women “not specially blessed by nature” adopted hair pieces to fill out their look. Emilie’s mother wore one, and although the Boston Journal reported that “False hair pieces are far less easily discovered when in place on the head than they used to be,” they still had a ways to go.

Sophie Brandt tries–and fails–to hide her age and her graying hair with a blonde hair piece held in place by a silk turban. Her friend, Molly Burton, has no patience with that.

“For Pete’s sake, forget that age obsession.  Some psychiatrist should start a movement to isolate the age bug.  It does more harm than the boll weevil by the loss to the world of experienced workers.”

Emilie Loring went all-out for her natural, “silver” hair. She was a writer, after all, and “silver” was rich in associations: sterling silver, a silvery moon, silver boxes, silver lamé, and the silver screen.

She cared very much about her own appearance and that of her characters.

“I won’t have photographs show an old-fashioned hair-do,” she declared.  “It is no use having smart heroines if their creator is dowdy.”

Like Emilie Loring the author, Molly B. the author dresses to show off her still-youthful spirit.

The tangerine shade of her square-neck, stiff-lace, short dinner frock contributed a faint glow to her gardenia-smooth skin, accentuated the platinum sheen of the waves of her parted hair and the darkness of her laughing eyes, a restrained touch of lipstick brought out the curve of her sensitive mouth…

“I was thinking… that you look even younger than when I saw you two months ago in Washington and goodness knows you looked young enough then, you the grandmother of a great big girl like me.”

“Why shouldn’t I look young?  Age is a state of mind—and health.  Our contract group has just given Sophy Brandt a party to celebrate her sixty-fifth birthday.  I fought it tooth and nail.  If they start to celebrate mine I’ll wring their collective necks good and plenty.”

“You’ve got something there.  Why tag a woman like you with the number of her years who earns more with her brain per annum than the salary of the President of the United States?”

Molly B. still had ten novels ahead of her, and Emilie Loring had three. Confidence in their ability to achieve kept them young–“and with sparkle, definitely with sparkle.”

I need to change gears here, because I owe you a solution to our crossword puzzle!

How many did you get right? 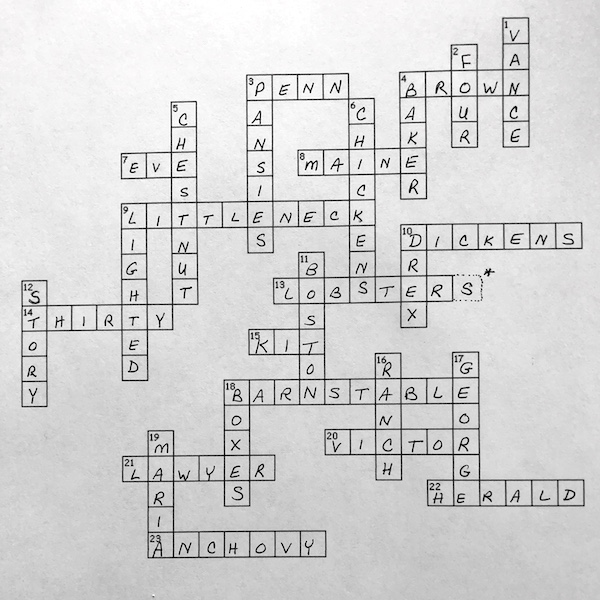 (I apologize for 13 across. “Ozy caught these” clearly indicated a plural. Mea culpa.)

Happy Thanksgiving, everyone! And Happy Landings!

3 thoughts on “That Hideous, Yellow Bang”