The broad deck was deserted. Passengers were settling their belongings in their cabins for the long voyage… A uniformed boy touched his shoulder.

His throat tightened. Was it a message from Eve? He waited until the boy had vanished into a companionway before he opened it.

There’s an air of mystery in cabled messages. At once terse and important, they carried the most important–and only–messages once a ship pulled out of port.

Messages had to be short, because cable companies charged by the word, but that terseness could cause problems. What if an important message were misunderstood?

Cables also passed under many eyes between sender and receiver. How could sensitive information be kept under wraps?

The solution was code. The sender used a book of codes to translate messages into words that could only be deciphered with the same book of codes. There were a lot of these!

Boston’s E. A. Adams & Company sold their Adams Cable Coder for use on the major steamships–White Star, Red Star, Cunard, Hamburg-American. Emilie’s family and friends traveled almost yearly to Europe and would surely have had a copy. What a fascinating book!

You’re on deck, and you see a steamer in the distance. Which one was it? Where might it be going? You pull out your code book, and in the front is a list: White Star Line, cream with a black top; Hamburg-American express line, yellow; Cunard line, red with a black top. 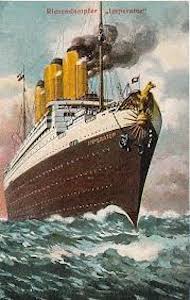 Let’s say you’re in Paris and leaving for London. You want to say:

“Am going to London and expect to reach there Tuesday morning. Telegrams sent to me there, care of the bankers, will reach me promptly.“

Have you ever looked at passenger lists? I had never realized the significance before, but in the column where people could list their destination address, they often listed either a hotel or a bank. The code book advised that it was fastest to send cable messages to one’s hotel, so when Emilie’s friend Louise Hallett (to whom she dedicated Fair Tomorrow) sailed to London, she listed the Goring Hotel.

Her cable to Emilie might have read: INGRATE LONDON TUESDAY HOTEL

Code words were chosen from a dictionary without consideration for their original meanings. It’s fun to see the kinds of messages that were anticipated.

INSIDIOUS: “Have you received my cable, and why do you not reply? Am leaving now for ______. Send reply, addressed to my cable name, to me at that place.”

INTEGRAL: “Market weak and active. Think you had better sell all you can at cost if you cannot do better.”

CABARET meant “absolutely necessary,” and COMEDIAN meant “Do not forget this. It is very important.” I like BUTTON for “a matter of great importance.”

Janice Trent (Lighted Windows) could have sent this message to her brother when she left her fiancé, Ned:

“Am leaving now for Alaska. Keep this strictly private. Do not call on Ned.”

Dates and times had special codes, too. Midnight was OWLET. Noon was OVERHANG. Emilie’s birthday, September 5th, was SECTARISM. Nothing very poetic about that!

Here are the codes, so you can look up your special dates: 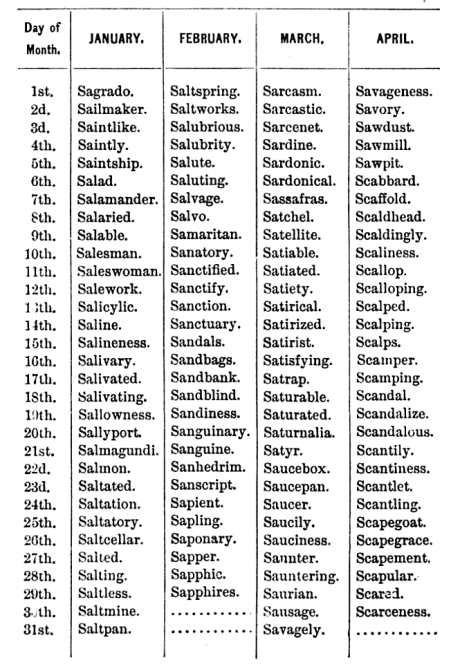 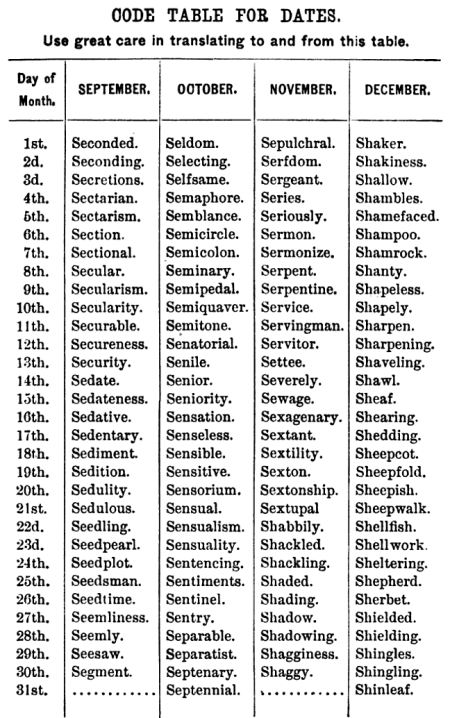 The Adams Code book is digitized on Google Books, if you want to create messages of your own. Until then, here are some codes for the upcoming holidays:

INVENTIONS: We wish you all a Merry Christmas

REMITTER: Give my love to everybody at home

REQUESTER: I miss you very very much

I couldn’t find “Happy Landings,” but I did find “Many happy returns of the day:”

Have a happy Thanksgiving, everyone! Thank you for all you do to keep Emilie Loring’s memory alive and to support my efforts here.