She was waiting at the Gift Shop for the films she had left to be developed when she became aware of the man standing beside her looking at bracelets. Sharp-eyed, rapier-tongued Ella Crane, the saleswoman, was expatiating on the charm and desirability of an ugly super-expensive silver band. As she went to the window to get another tray, sympathy for the woman who was about to receive the atrocity overcame Cindy Clinton’s caution.

“Not that one,” she whispered. “It’s been here for ages.”

He turned. The clearest gray eyes she had ever seen keenly interrogated hers.

To Love and to Honor begins three years after Cindy Clinton’s marriage to Naval officer Ken Stewart–a man she has never met–to save their fathers’ oil interests during wartime.

“For the love of Mike, do you mean that the son never had seen the girl? That he consented to marry her sight unseen? I can’t believe it.”

“Looks that way. Folks heard he said he didn’t care. He’d probably never get out of the service alive–they were so secret about where he was, we suspected he had something to do with those terrible bombs–if the girl was willing, they could suit themselves.”

Now, the war is over, the oil interests will be sold, and the marriage can be annulled. Bill Damon appears to represent Stewart’s legal interests, while Hal Harding and Thomas Slade vie for Cindy’s affections. Cindy and Bill meet in the gift shop, but there’s a hitch: Bill is actually her husband, Ken Stewart, whom she thinks is still overseas with the Navy. She and Ken have only exchanged business letters, but sometimes, she has wondered…

“My imagination, apt to work overtime, visualized Ken Stewart’s return—in appearance a combination of Gary Cooper and Walter Pidgeon, at that time my favorite movie actors—saw him fall desperately for me, I for him, and we’d live happily ever after.”

Cindy’s pride is hurt when “Bill Damon” arrives instead, but he’s every bit as attractive as she’d imagined Stewart might be.

“I adore presents but I can’t fall for the bribe. And while we are on the subject, I don’t have to be bribed to go with you anywhere.” There was too much emotion behind that statement. Sounded as if she were throwing herself into his arms. She laughed. “There’s a whole bunch of orchids for you, Sirrah.”

Trust builds as they unmask a burglary ring, but how will Cindy react when she learns that he has lied to her? Will she love him as Ken Stewart? He confides to secret agent Alida Barclay:

“Ally, the followers of the Prophet have a proverb, ‘Leave the future to Allah, and pitch a tent for today.’ My tent is pitched.”

Emilie Loring was sick during the last year of her life as she wrote To Love and to Honor, but you would never guess it. Descriptions were as vivid, romance as real, mystery as confounding. If you could read only one Emilie Loring book, this is a good choice.

Her favorite flowers bloomed in the garden:

Against the gray stone walls of the house, perennials put on a flower show of gorgeous color; humming birds poised above red and pink hollyhocks; a bee reeled drunkenly from out the depths of a mammoth regal lily; a great yellow moth fanned black-streaked wings on the tall, light-blue spike of a second-blossoming larkspur beside a rosy clump of phlox; a cloud of small yellow butterflies hovered above the orange king and lemon queen calendulas.

And her harbor view came alive at sunset:

Mast tops were tipped with crimson and every bit of brass or chromium on board became a little leaping flame as the boats swung lazily in the outgoing tide. A few rosy cloud fluffs moved slowly across the darkening sky as if to give one brilliant star the right away.

Emilie was always enthusiastic about food. Get a whiff of this apple pie:

Sarah Ann Parker drew a delicately browned pie from the oven and set it on a trivet on the enamel table. Juice bubbled from an opening in the top crust and spread the delectable smell of baked apples, cinnamon and sugar.

Emilie Loring stayed at the Marshall House (See I Said to Myself, “I Know This Place”) but housed her character Cindy Clinton in “The Castle” at Pirate’s Cove and newcomer Patty Drew at “Rockledge.” Real homes named “The Castle” and “Rockledge” were downeast a little further, at Popham Beach. Inspiration for the putting green was close at hand: eighty-three-year-old Emilie won the Marshall House putting contest that summer!

was there a putting green? she adored putting…

“You said that you loved to putt. I’ll plan soon for you to try the green at The Castle.

World War II is still on their minds. Bill Damon has recently returned from the Berlin Air Lift, and Cindy Clinton’s boat, The Mighty Mo, is named for the USS Missouri aboard which the Japanese surrendered.

“My jalopy is unreliable, of course I could go across the cove in my Evinrude, The Mighty Mo, but I’m trying to engage a chauffeur with a snappy car. Will you take me?”

Three times, she used lyrics from the Broadway musical “South Pacific,” which was adapted from James Michener’s Tales of the South Pacific. Michener wrote the short stories right after the war, which he spent as a lieutenant commander in the US Navy, stationed in the Pacific.

The Broadway musical followed in 1949, and its score was quickly made into the LP that Emilie Loring enjoyed. She missed the now-vintage film and sound recording with Rossano Brazzi and Mitzi Gaynor, but that’s how I imprinted the lyrics and recognized them in her dialogue.

“To make the occasion perfect how about producing the ‘South Pacific’ album and turning on the phonograph in the playhouse? I can’t think of anything more delightful than to sit beside this sunset-tinted pool and hear Ezio Pinza sing ‘Some Enchanted Evening’ especially for me.”

“Once you have found her never let her go.”

“Sary, her phonograph plus her sense of the dramatic. I don’t need to be reminded not to let you go.”

Emilie couldn’t resist a little commentary on the new, brief styles of the season.

After spending hours on this beach, observing the swim clothes many women wear, no one ever will convince me that my sex is vain, she told herself.

Cindy Clinton’s choice of beachwear gave me a smile–modest as to length and with the added cachet of a necklace!

Her cap matched the string of large turquoise-color porcelain beads at the base of her throat, as in a white sharkskin suit with a brief pleated skirt she ran toward the shore. 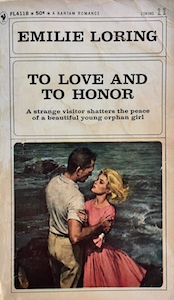 As it often was, Emilie’s theme was in her title: To Love and to Honor.

A sense of responsibility when there is wealth and power is the way I see life, and that’s the way I intend to try to live it, live it with a man who sees it that way too. When I promise ‘to love and to honor’ I’ll mean it with all my heart and soul and mind.”

“Hold everything, Cinderella, you have it wrong. In the marriage service the words are ‘to love and to cherish’—I ought to know.”

His heartless chuckle increased her determination to make him understand.

“I still stick to ‘to love and to honor’—accent on honor. If you honor a person you’d be bound to cherish him or her, wouldn’t you?”

Then what would she do?

Something definite. Something worth while. I will decide what I want most, plan for it and go after it with all there is in me. Bill Damon has the right idea, I want to be an honored citizen who counts in the welfare of the nation. I harangued Hal Harding as to the responsibility of wealth. Now it is up to me to prove I can practice what I preach. 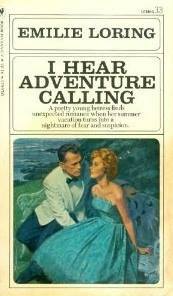 The inspiration of her earlier book, I Hear Adventure Calling, reappeared, as did that book’s advice to think success and invite success.

“I don’t wonder you whisper. Combined with the starlight it suggests enchantment, can’t you hear adventure calling? You being you, I’ll bet you can.”

“Give up adventure? I would say I heard it calling. Isn’t marriage the greatest adventure extant?”

I don’t know that she wanted to write only thirty books, but Emilie Loring had promised that she would write at least thirty, and this was it. She was in a reflective mood.

Things. Things. Things. Too bad her put-my-house-in-order attack hadn’t started on this accumulation. She would tackle it next. She was the last of her family, there were no relatives to whom it would mean anything, but it ought to be of use to someone.

I won’t give away these costumes, she decided as she lifted the cover of the cedar chest. They represent too much fun and the fun one has had can’t be snitched away, she philosophized as she held up a ragged dark blue denim work dress. She shook it and between the pendant rags glittered a frock of silver sequins. She remembered the night she had worn it, how at the stroke of twelve she had caught the tags of two zippers and with the prayer they would not fail her had dropped the dark blue garment to the floor. The lightning change from rags to elegance had been a sensational success.

She lived that last year with her son Robert in their old, Wellesley Hills house, and I wonder if she really did traipse up the stairs to the third floor and look through trunks stored there. I hope that costume was real; that would have been really fun.

To Love and to Honor came out on November 3, 1950, and four months later, on Tuesday, March 13, 1951, Emilie Loring died. Her longtime friend Clara Endicott Sears eulogized:

“In the thirty novels she has left behind her she has contributed to thousands of readers some of her ardent joy of living. This world seemed very good to her and she wanted to go on living in it.”

I’ve had an emotionally-hard time writing about Emilie’s death, a feeling that my mentor Armond Fields told me to expect (See: A Lucky One-time Meeting at the Library ) But there was no hint of melancholy in her final book’s last lines:

“Again? What do you mean by again?” Her tender eyes were alight with laughter as they met his. “Want to know something? Deep in my heart I never gave it up.”

14 thoughts on “Emilie Loring’s Last Book: To Love and to Honor”