Sometimes, things just work out. I wanted to research the Baker family’s theater connections and planned a trip to the archives of my alma mater, USC. When I shared my purpose, archivist Claude Zachary suggested that I might also want to meet Armond Fields, a biographer and the donor of a collection of theater memorabilia. That sounded great. I wrote to Mr. Fields:

Thank you for your willingness to meet with me on Thursday, March 9.  At what time and place shall I find you?  Would you care for a cup of tea at the new Tea House?

He assented and suggested that, meanwhile, I might research The New York Clipper newspaper which covered nineteenth century theater. I smile at the formality of this, because when we met, it didn’t take ten minutes for us to cast formality aside and just talk to each other.

It was a great time to meet Armond Fields, as our interests were aligned.  He had recently curated an exhibition, “Setting the Stage,” on the roots of American Popular Theater–programs, prints, posters and souvenirs from nearly three hundred years of stage history.  He had also written the biographies of theater people in New York whose work intersected that of the Baker family.  Just then, he was researching Tony Pastor, the father of vaudeville, whose Fourteenth-Street Theater was a venue for Robert Baker’s shows.

“Fourteenth Street Theatre–This house reopened Saturday evening, August 27th with the first New York production of ‘Girls Will Be Girls,’ a three act play, by R. Melville Baker and Joseph Hart. Wm. A. Brady, who puts forward the production, gave it for the first time on any stage at the Able Opera House…”   The New York Clipper, 3 September 1904, p. 638.

I confided my years of researching Emilie Loring’s life and learned that he started the same way. His grandfather Lew Fields was in theater, but Armond knew little about him. Twenty years later, he had written his grandfather’s biography as well as the stories of more theater people he discovered along the way: Lillian Russell, Sophie Tucker, Maude Adams and Eddie Foy.

“Some of his heroes already have fallen from memory; the names of others may ring a bell, but they’re rapidly being crowded out of the collective mind.”  Mike Boehm, Los Angeles Times, 31 October 2005

Oh, we were definitely on the same wave length! It wasn’t just that we wanted to revive the memory of bygone people. We also shared the drive to learn everything we could, the trancelike, hyper-drive world that we enter when we synthesize and create, and the desire to tell a good story, truthfully.   Our quick cup of tea at the library stretched into three hours…

It was a natural, wonderful conversation, the kind you just enjoy, not the sort for note-taking. But as soon as I got to my room that night, I wrote down as many of Armond’s suggestions as I could remember. To pay forward his generosity and kindness, I share them with you: 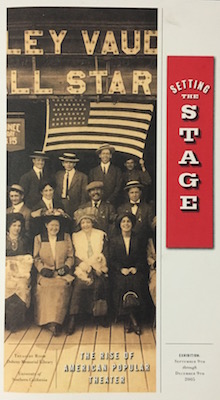 Write every day, even if you don’t feel like it. It trains your mind.

Outline, then write, chapter by chapter, in case you discover more along the way. Don’t overwhelm yourself.

Keep citations with the material.

Don’t worry about length; your editor will do that.

Get a trusted reader to read and edit your manuscript for you. Try a chapter, and if it comes back better, then keep going. A good editor will learn your way of writing and work with you, not try to change you but make your work better.

No ego—just get the best product at the end.

A biography will only sell a few thousand copies, but because it’s history, it’s always there. People can always find it.

A biography can appeal to a niche market, but a “roots” story can be of interest to many.

Show how her writing and method changed over time.

People want to know her at the end. Say why she didn’t do some things but did others instead. Show backdrop, influences, context, psychology, and perspective.

Start with the genealogy. Then her childhood or first big period.

Summarize the information you have to leave out; use an appendix.

Maybe forty photos can get in.

There’s a little depression when you get to the end of a book. That’s natural.

Turn off the phone, get away from interruptions when writing.

Write on a pad, then type.

Writing creates a wonderful state of mind. You can see all of the connections, and it’s hard to come out of that place.

Armond Fields died in 2008.  I am so grateful to have met him.  His American Theater Collection occupies ninety-six linear feet in USC’s Special Collections.  His suggestions remain on my bulletin board, and his biographies are “always there.”  We can always find them.

3 thoughts on “A Lucky, One-time Meeting at the Library”