“I love to do anything I try to do as well as possible.  It puts adventure into life.”

Emilie Loring signed the contract for Today is Yours at the end of April, 1937 and agreed to produce a finished manuscript by September 15th, just shy of five months later.  Orders poured in from around the country.  Before publication, the book was committed to a second printing.

No wonder Little, Brown had also secured first-option publishing rights for her next two novels, whatever they might be.  And no wonder the book’s female lead, Gay Romney, could speak so confidently of doing as well as possible in anything she undertook.

But this story is about first doing less.

For those who suspect that Emilie Loring novels are formulaic–boy meets girl; boy gets girl, they marry and live happily ever after–Today is Yours is a surprise.  When the story opens, Brian and Gay Romney have already been married two years–one “love is heaven” year and a year of separation on the way to divorce.

A newspaper synopsis leads on:

Major Bill Romney retires from the presidency of the Romney Manufacturing Company and makes his nephew, Brian Romney, his successor.  He asks Brian and his beautiful wife, Gay–who are separated–to live with him at Rosewynne and to “help by putting up a happily married front to the world.”

“You can do it if you’ll forget the yesterdays and remember that today is yours, and the miracle is, it is always today.”

Gay continues to work as a photographer’s model in New York.  Brian determines to keep peace among the workers and discharges Eddie Dobson, a young foreman.  Louis Dubois–husband of Brian’s cousin–who resents Brian’s position, incites trouble at the plant.  He attempts a flirtation with Jane, Mac Romney’s wife.  Meeting Jane on the train, Gay keeps her busy and telephones Brian.  He and Mac go to New York.  At a night club they receive word that Major Bill has been shot.

That’s material enough for a complex plot, but we haven’t even mentioned yet that Gay declares herself in love with Jim Seaverns, her long-time ice skating partner whom she’d dated before Brian.  And Brian, inexplicably, keeps going out with the devious Bee Ware.  (Let’s pause a moment and enjoy the old habit of nineteenth-century-novels that named characters for their, uh, characters.)

Togetherness reminds Brian and Gay of their attraction for one another, and they realize the ways that they let their marriage down.

What had he brought to their marriage?  Love? Passion? Companionship? Money?  Yes.  Understanding of the seriousness of the contract into which he and she had entered “in the sight of God”?  Common sense?  Selflessness?  Tact?  Sacrifice?  No.

“[The light touch] has been known to turn gloom to sunshine…” If only she had put into practice what she was preaching, she thought bitterly…Suppose she went to him and told him she was sorry…

When Emilie wrote Today is Yours, she and Victor had been married forty-six years.  She knew love offered no detour around troubles, and she had Brian’s uncle speak out:

“Do you think marriage is all happiness?  That it doesn’t take effort and tolerance and eternal vigilance to make it a going concern?  It has hours of sure-fire ecstasy; the next day it may seem unbearable.  It doesn’t remain tuned in on the honeymoon wave-length.  It’s a rich, exciting drama, but–it’s also a contract between faulty, passionate human beings, who clash and love, defy and surrender, suffer, forget and forgive.”

Characteristically, her heroine found an answer in strength, not submission.

She had changed. She no longer felt bewildered. She felt grown-up, competent to meet life as it came with head erect and a sense of marching forward to the rhythm and beat of far-off music.

The marriage theme runs alongside a quick-moving plot.  This one has a shooting, a fire, attacks in the dark, striking workers, conniving men and women, lively dialogues, and glamorous costumes by the score. 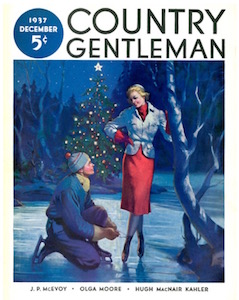 I suspect that a skating scene by Manning de V Lee was one of several submitted for the book’s cover.  Skating scenes shine in the middle of the novel, first when Gay skates with Jim Seaverns and then when she interrupts Brian and the insufferable Bee Ware on the ice.  Instead, the publisher chose de V Lee’s illustration of Gay Romney in an enchanting, silver gown, and the skating scene found its way to the cover of Country Gentleman.

She came down the stairs in a lustrous satin gown, which shaded from cool silver at the deep and lovely neckline to glowing blue at the hem of the sweeping skirt.

Today is Yours was a bona fide best-seller, nationwide.  It sold faster than Faith Baldwin’s and Agatha Christie’s latest, both released at the same time.  (To see more about her best-seller status, click here.)

Two months after Today is Yours’ release, Emilie Loring held a book signing at the Jordan Marsh department store. All sixteen of her novels were on display, and she spent the afternoon inscribing copies for her fans.

The next day, she was back at work on High of Heart, due to come out in November.

“Think how hum-drum it would be if every day were just like every other day with no hills to climb–that’s what achievement is–if it were always on a dead level.”

8 thoughts on “The Miracle Is That It’s Always Today”