Once again, I have Emilie Loring to thank.  In a rush to produce a tasty breakfast with no more than I had in the pantry, I pulled out her recipe for bran muffins.  The very thing!

We enjoy bran muffins when cold and sliced more than any others.  For the Comfort of the Family

Emilie usually had a maid and often a cook, but this recipe comes from her first book, For the Comfort of the Family: A Vacation Experiment (1914), which begins, “Mary the Temperamental was departing.”  When the maid resigns, the family agrees to do without servant help for the summer, and Emilie sets about to improve their homemaking system.

This is more than a cookbook.  It’s a household book, compiled from articles published first in women’s magazines under Emilie Loring’s pseudonym, Josephine Story.  The Evening World called it, “definite practice in place of the airy theories so often spun by the domestic economist.”

Written one hundred years ago, its issues are still current.  (That can give you pause.)  Emilie de-clutters, substitutes paper ware for linens, organizes with color, and suggests go-to ingredients and recipes.  She makes use of left-overs and produce from the garden and repurposes saved containers.  I do enjoy the fact that, even with paper ware, she set a formal table.

Previous posts have shared her recipes for scones and her prized hard-sauce.  This is also the book that introduced us to Emilie’s neighbors, the Owen sisters.

Not a story, but neither a sterile how-to, For the Comfort of the Family reads like good conversation.

Every week has its day of reckoning; the day when I realize that I must slow up or the week’s appropriation will be spent before its time; ’tis then that I play that absorbingly interesting game “Use What You Have.”

To play fairly one cannot open an expensive can of something, which if credited will make a big hole in the week’s expenditure, but one must use one’s imagination, skill and ingenuity…  Having the courage to dare and try new combinations lifts cooking out of the slough of monotony.

When her cake fails to rise, humor comes to the rescue:

Craving appreciation, I called the Judge, our black and white hound, and crumpled a few fragments of the alleged cake into his dish.  The dog gave one disdainful sniff at the offering, one reproachful glance at me, then turned and stalked haughtily from the room.

Emilie posed the photographs for the book herself, and her son Selden appeared in some of them.  These were the first photographs I saw of her home and family, and I examined them and the text for details that might tell me more.  What kinds of dishes did she use? Could I figure out anything more about her?

“Because I had left my spectacles upstairs I read a recipe wrong with the result that at the end of four hours, when I wanted to serve it, I had a gently flowing rivulet instead of the firm jelly I expected… [later]… Fastened securely to the same shelf is a spectacle case containing an extra pair of eyes which never leave the kitchen.”

This was corroborated by handwritten notes in VERY large handwriting that I found in her archives, apparently written on a spectacle-less day.

Some of the nostalgic details are just fun to see–the fireless cooker, for example, which was the forerunner of our crock pots.  How about these from another of Emilie’s photographs?  Do you know what they are? 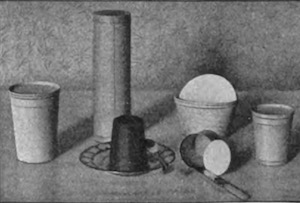 They are paper jelly-cups in assorted sizes, with a paper lid that fills in the top, like those still used for individual ice cream containers.  The rolled edge we are used to on paper cups had just been patented in 1914.  In an article that year that didn’t make it into the book, Emilie suggested using the new cups for small amounts of jams and jellies made from extra berries left on-hand.

“I now have on the shelf of my preserve-closet a row of two-ounce and four-ounce paper cups of raspberry and red currant jelly which I made as I would any jelly to be put away in glasses, using one-third as many raspberries as currants.”

Look at this list of ingredients from back then.  I’m not sure which surprises me more: that I recognize so few or that some of the same companies are still making the same foods today.

One of my favorite parts of the book is the chapter on the “Emergency Cupboard.”

The neighbors were interested, but shook their heads with a “Wait till friends appear unexpectedly!”  Ah, they little knew the soothing consciousness of a well-stocked emergency cupboard on the shelves of which were arranged large cans and small cans, jars, bottles and packages in infinite variety.  As canapés make a most auspicious beginning for an emergency luncheon, I keep on hand Russian caviar.”

She goes on to list her Emergency Cupboard’s three mainstays:  Russian caviar, anchovy paste, and Major Grey Chutney.  I challenge you to produce all three from your cupboard right now.  No, me neither.  (I do, however, have the chutney.)

What would be my equivalent?  Water crackers and cheese?  Eggs and mayonnaise?  Peanut butter and jelly?

Emilie kept on hand a can of plum pudding, dates, and canned soups (mock turtle, anyone?).  I love the woman as an author, but she leaves me behind with ox-tongue in glass, even when served “in dainty slices with a vegetable salad, or baked bananas, or cold potatoes diced and stewed in cream.”  And that mock turtle soup?  Calf brains and organ meat.  I’ll pass.  I’m on board for figs, though, and I’ll happily try preserved marrons, now that I know what they are:  glazed, candied chestnuts.

“My sales resistance is lowered to the point of juvenility when it comes to those heavenly triplets, mushrooms, marrons, and meringues.”  It’s a Great World!

Before Fanny Farmer’s The Boston Cooking-School Cook Book in 1896, recipes might call for an amount the size of your fist or thumb, of a walnut or an egg.  By the time Emilie was  announced as “a new writer on home economics,” the field had grown by leaps and bounds, elevated from Mother’s tutelage to full-blown courses and degrees.  Down Chestnut Street from Emilie’s home, Boston’s Garland School of Homemaking taught girls the latest in home economics and prepared them to preside over “well-ordered homes.”

For the modern young woman who has completed her secondary school or college education, the Garland School offers complete courses in Homemaking.  Technical, practical and cultural subjects relating to the conduct of the home comprise the curriculum, which prepares young women fully for the responsibilities of homemaking and leads to many interests and avocations that are developed through homemaking education.  Garland School brochure

My first inclination is to read this as “homemaking instead of” rather than “homemaking in addition to,” and I wonder at the college girl who would call this progress.  It reminds me a little of the comments we used to hear in college about whether a girl was going for her B.A. or her “M.R.S.”

But whatever our backgrounds or future inclinations, we all have to eat, and we all have to live somewhere.  What is more practical for anyone than secure knowledge and skill in home matters?

It was old-fashioned to think that women could only take care of homes, but the idea that they should flee homemaking is just as off-balance.  I like to cook, sew, garden, and decorate.  I can’t say I love having things break down, but I get a thrill of pride when I figure out a problem and fix it.

“Are you jeering at home making?  I love it.  I love planning appetizing meals.  I would rather make the kind of home my mother made, which was an inspiration to everyone who came into it, made a tired man stand a little straighter when he entered it, than do anything else.  It isn’t the easiest job in the world, either.  If trying and liking to make good dates me, then I admit I’m hopelessly old-fashioned.”  Hilltops Clear

You can bet that Emilie did housework her way.  She was an optimistic, creative Baker, and drudgery was unlikely to remain on her schedule for long.

“Find drama in your housework! … If you are faced with all kinds of complications in the household, you are the heroine of a play full of plot, but destined to be triumphant in the end, and you go at your tasks in that spirit.”

So that brings me back to the bran muffins.  The recipe requires no eggs, no oil or shortening, no sugar.  Just flour, wheat bran, salt, baking soda, milk, and molasses–all ingredients from the pantry shelf, except the milk–an emergency cupboard recipe, for sure!

When I’m out of molasses, I substitute two tablespoons of honey and pureed fruit–bananas or peaches work well, but try whatever you like–and add enough milk to equal the original volume of wet ingredients or make the batter look about right.  My successes have been many, with only an experiment or two that Emilie’s dog would have disdained.

Emilie didn’t specify an oven temperature or time, so I use 350 degrees and 15 minutes.

For the Comfort of the Family: A Vacation Experiment is available online in its entirety.  For recipes, for wit, for ideas you can use in your own home, and to read the first book published by this prolific author, give it a try.

And keep a little caviar in your cupboard. 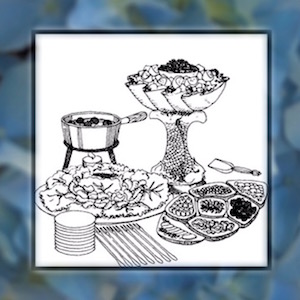 6 thoughts on “Keep a Little Caviar in the Cupboard”