Graduation time is near, a natural time of reflection and appreciation.  Mary Ellen Chase of Blue Hill, Maine wrote that she—and Emilie Loring—belonged to “the last of the many generations who will have studied the classics as a matter of course.” And this, mind you, was in grammar school.

Beyond grammar school, they learned languages, art, and music. Emilie completed her education with the one-year, English preparatory course at Dean Academy in Franklin, Massachusetts. Her curriculum focused on reading and writing, but she also learned French, German, painting, drawing, and both instrumental and vocal music.

Have you ever seen a child’s schoolbook from the turn of the last century?  The Table of Contents for the fourth-grade Jones Reader reads like my college English major: Emerson, Browning, Thackeray, Longfellow, Hugo, Dickens, Shakespeare, Alcott… 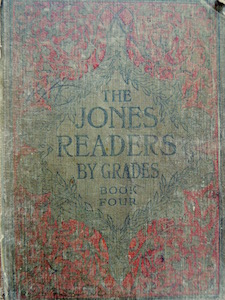 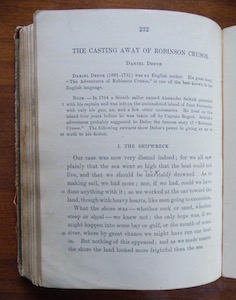 An excerpt from The Adventures of Robinson Crusoe begins with a brief biography of its author, Daniel Defoe, then  suggests an historical event which may have inspired the story. The editor cautions, “No lesson should be considered mastered until the difficult words and allusions are clearly understood.”  The reader of this copy went a step further and noted the pronunciations of new words.

Emilie Loring’s books are full of literary allusions. It’s possible to gain their meaning from context, but the experience is richer when one knows the reference.

“…the plane, which looked like nothing so much as a Brobdingnagian bird of prey…” The Trail of Conflict

“My dear, if the break was your fault, don’t be afraid to say that you are sorry. Do you remember that line of Petruchio’s? ‘Little fires grow great with little wind.’” A Certain Crossroad

[William Shakespeare, The Taming of the Shrew]

“Fly pleasure and it will follow you.” Hilltops Clear

Few educated people of those earlier generations went to college to learn their jobs. They prepared to join an educated citizenry, sought meaning through the study of the universe in all its aspects, and developed deeper appreciation for the entertainments of their time—music, art, literature, and dramatic performance. Emilie’s mind was filled with classic references, and her characters’ thoughts are the better for it.

“We turn to great books… that the encounter with them might do for us what they did for past generations.” David Levine, Four Sides of a Cube

“Every now and then a man’s mind is stretched by a new idea or sensation, and never shrinks back to its former dimensions.” Oliver Wendell Holmes, The Autocrat of the Breakfast Table

Emilie Loring adopted a lifetime program of reading to extend her understanding and keep her ideas up-to-date. As you congratulate your graduates, don’t ask what they’re going to do with their degrees—it only annoys them. Instead, congratulate them on persevering, on stretching their minds with new ideas and new habits of thought.  And when you read your next Emilie Loring book, appreciate afresh the enriched mind that created them.