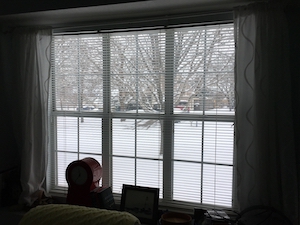 A cozy morning here, coffee in hand, newly-fallen snow outside… I open a gift from my son, Head of the Bay by Annie L. Clough. I’ve wanted this book a long time, since I first used it at the Blue Hill Public Library. 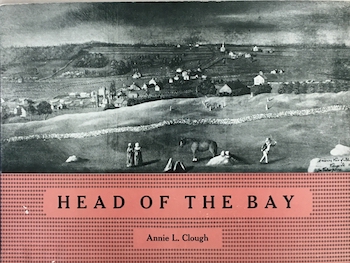 “Head of the Bay” is Blue Hill, Maine, Emilie Loring’s summer home for forty years, and this is a book about its history and residents. George Clough, “Boston’s Architect,” designed Blue Hill’s town hall, and Annie L. Clough was his daughter.

Emilie Loring never read Head of the Bay, which was dedicated a year–almost to the day–after she died, but it tells the story of a place she knew so very well. You may not have put the pieces together, but if you’ve read Emilie Loring’s books, you know more about Blue Hill than you may think. 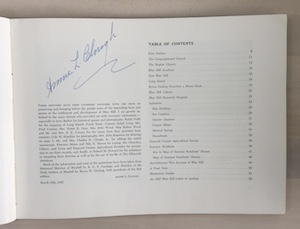 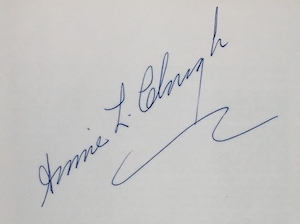 I love it that my copy was signed. I’ve only recently begun to search old wills and land records to find my own ancestors’ signatures. There’s something so personal about a signature. Annie held my book–not just one like it, but my book–and signed her name with an individuality that came from years of experimentation and practice. In my mind’s eye, I imagine a silver pen in her hand, the sleeve of a white blouse… She was proud of her book–look at the size of her signature and the flourish that follows–as she was proud of her town.

In 1762, before the American Revolution, when Maine still belonged to the Massachusetts Commonwealth, “sixty good Protestant Families” chose homesites at the head of Blue Hill Bay. “Plantation No. 5” went through several name changes: New Port, Newport, and finally, in 1789, the town’s charter named it “Blue Hill.” Emilie’s husband, Victor Loring,  spoke at the 1910 ceremony when this plaque was dedicated to the founders.

And this is the place Di Vernon means when she talks about hiring help from the Academy in Where Beauty Dwells: 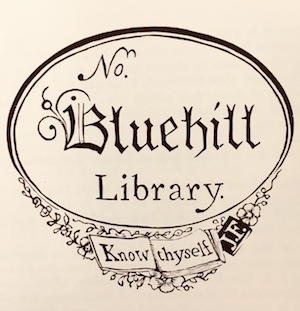 I’m a little curious about Emilie’s relationship with the Blue Hill Public Library. For no reason that I can put my finger on, I sense a bit of distance (rivalry? disapproval?) between her and its patroness, Adelaide Pearson. Adelaide promoted herself into local celebrity. She claimed to be the first (American?) woman to travel the length of Italy on a donkey and the first to cross the Sahara on a camel. Inspired by a visit to Mahatma Gandhi in India, she started the Rowantrees Pottery in Blue Hill, where the Loring grandchildren made projects in the summertime.

A number of improvements at the Blue Hill Public Library came about through the encouragement (?) of Miss Pearson: its card catalog, expansion of its book collection, and the construction of its current building. Emilie loved adventure, admired gumption, and valued books; I can only imagine that she would have appreciated all of these accomplishments. Some locals felt that Miss Pearson was rather more pushy than she was encouraging, and, that, along with Miss Pearson’s endless self-promotion, may have put her on the outs with Emilie. I’m going to keep looking into this one. It may lead to a story. 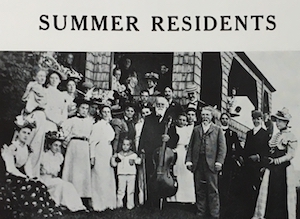 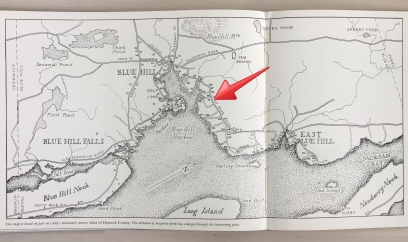 The main attraction of this volume for me is its map showing the summer residents’  cottages and giving details about them. Here are people I’ve come to “know” through my research and cottages with familiar names for Emilie Loring readers: Arcady, Manor House, Seven Chimneys, Pansy Cottage, Twin Brook Farm, Hilltop, and Stone House (red arrow). 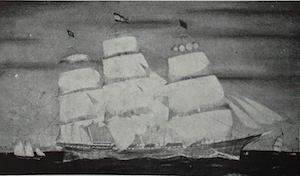 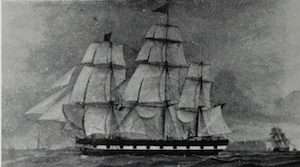 Annie Clough devoted nearly as many pages to the 119 sailing vessels built in Blue Hill, listing their names, owners, and tonnage, and relating stories about them. For nearly one hundred years, Blue Hill boys went to sea, and many families had several captains among them.

This was a past that Emilie understood. Her great-grandfather was a sail maker, and her great uncle was the  richest ship builder in Portland. Annie Clough’s story about Captain John Warren Kane, III reminds me of We Ride the Gale!

“Once, when he was sailing the Libra around Mount Desert Island, he came to a drawbridge with the wind blowing at gale force. The keeper refused to open the draw because of the dangerous high wind, but the Captain was adamant. “Who is it?” called the keeper. The answer “Captain Kane” came back together with some forceful seafaring words. The bridge opened at once, and the Libra shot through the draw like an arrow.”

The story had come down through the generations that once when menaced by the fury of a storm, with his ship tossing like a chip in foaming seas, with wind roaring, spray hissing, the rigging rattling, moaning, creaking, splitting, he had clung to a mast, had shaken his fist at the mountainous waves, had shouted above the tumult:

We Ride the Gale

I’m also a bit charmed by the many uses of soap that we have forgotten. I remember one of Emilie’s characters using soap to quiet a squeaking door. Clough relates that a Captain Stevens “would soap the seams of a wooden box, fill it with the latest marine news and fresh vegetables and drop it overboard for the men on post.” (Presumably, it wasn’t in the water long!) 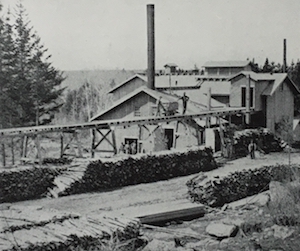 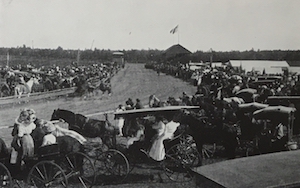 When you live forty years in a place, it’s natural to connect with its history. Emilie Loring cited the quarries on her own land, correctly, as the source of granite for Stone House, included Blue Hill’s copper mines in Here Comes the Sun! and used its racetrack in Uncharted Seas. 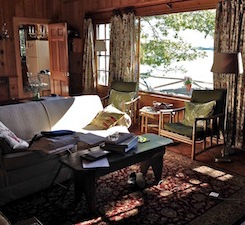 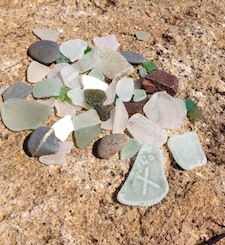 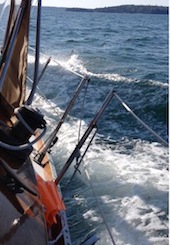 I have spent parts of eleven summers in Blue Hill, and its landmarks hold double memories for me–those I know from Emilie Loring’s books and those I’ve made for myself. I’m not even a full-time summer resident like Emilie Loring was, and still it’s one of my dearest places. This year, “my” sea glass cottage isn’t available, so I’m scouting out a new, summer place, maybe on Parker Point where the summer colony began. I’ll report back.

Meanwhile, this snow isn’t going to shovel itself.

Have a lovely winter’s day, wherever you are, and if you can’t visit Blue Hill or read Head of the Bay anytime soon, crack open one of Emilie Loring’s Blue Hill books or click on one of the links below to re-read one of these Blue Hill posts and follow the links to more. You’ll feel like you’re there.

The Past Comes Calling

Hiking is the Best Way to See Blue Hill

You Have the Opportunity and You Must Use It

16 thoughts on “A Silver Pen in Her Hand, The Sleeve of a White Blouse”