Curiously, Blue Hill mountain cannot be seen from the village of Blue Hill, which is not quite at its feet but about a mile away, at the head of the Bay.  Blue Hill is easily seen from almost everywhere else, though.  It’s unmistakable from the water, a blue-green, solitary mountain, or monadnock (a new vocabulary word!) 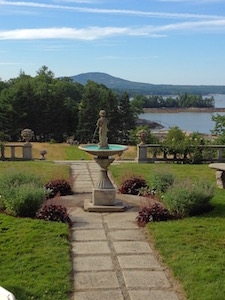 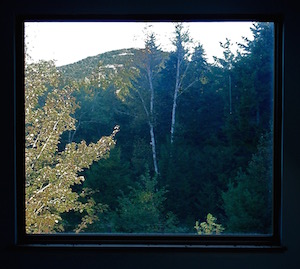 For the fancy cottages on the Parker Point side of the bay, Blue Hill provides a scenic backdrop for pleasure boating and veranda visits.  I rented a cottage for two summers on the opposite side of the bay, atop a hillside quarry that Emilie owned.  That isn’t a framed picture; it’s the view I had of Blue Hill outside my bedroom window.  Emilie had a similar view at Stone House; her bedroom also looked straight west to Blue Hill.

The best way to see Blue Hill is to hike up all 934 feet of it. There are six trails, and you can find maps here.  I take the gradual route, the Tower Service Trail. When I get to the base of the hill, I turn around for a sneak preview of the views I’ll see at the top. There are Blue Hill Bay, Newbury Neck stretching across in the distance, and Long Island peeking in on the right. 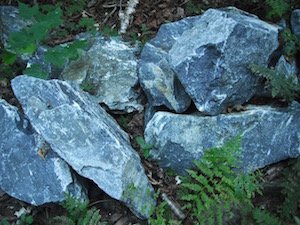 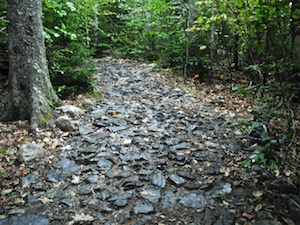 I plunge into the forest. If you expected a smooth, woodsy trail, you’re wrong. This is Blue Hill, named for the blue granite of which it’s made. No trail-maker worth his salt would ignore the raw materials at hand. No question, the rock is durable—and a tad slippery in rain or fog.  I wonder at the trail’s use as a service road; those must be some tough vehicles.

Following the trail, I forget about water views. Ferns and moss are everywhere, the stuff of fantasy story books. They don’t limit themselves to the ground but clamber up rocks and boulders—anything they can do to catch a ray of sun peeking through the forest canopy. 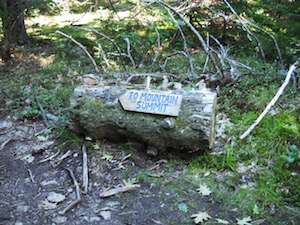 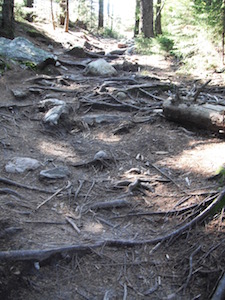 After some smoother patches comes a sign where two trails meet. This is the Hayes trail, which drives straight up the front of the mountain. I admire it but am not sorry to feel fresh for the remaining climb. Tenacious tree roots beat out rock near the top, the sure sign I’m about to break through. 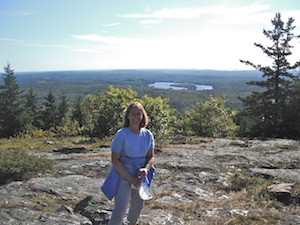 And then I’m there, atop a broad expanse of granite. Since I was a kid, I’ve loved climbing on rocks, and each outcrop is an invitation. I scramble from promontory to promontory, seeking the best vantage point.

“Doesn’t that view do queer things to your breath?”

Julie nodded without speaking… In the inner harbor boats of all types and sizes swung at their moorings. At the town wharf a schooner–picturesquely colorful in the distance–was being loaded with lumber. Toward the north the outer bay spotted with islands and reefs rippled and surged on to the open sea. Here Comes the Sun!

To the east is the view I’ve waited for: the village, Blue Hill’s inner and outer bays, and Mount Desert in the distance. To the south are prosaically named First Pond, Second Pond, and Third Pond which empty into the Salt Pond and Reversing Falls.  And did I forget to mention that there are blueberries growing up here?!  But this is Maine, and on another day, perhaps later on this day, all can be hidden in a sudden shroud of fog. 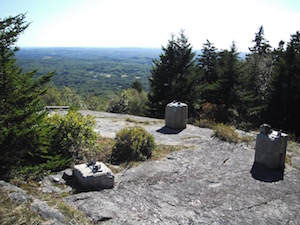 Off to the side, still pegged to a flat expanse of rock are the remains of a 1940s fire tower and a ranger cabin. I wonder if they inspired the mountain scene in As Long As I Live.

Lamont stopped the roadster at a gas station in a small white church-spired village near the base of the mountain… The mountain top was patched with rocks and low juniper and scraggly blueberry bushes… Beyond him she could see the chimney of a small log cabin. As Long As I Live

Blue Hill is a touchstone

It’s nice to have Blue Hill as a touchstone, valued by generations and shared with Emilie Loring, who lived summers in sight of it for forty years.

“…It can be recorded that along the shores of Bluehill Bay are found views which delight the eye, breezes which invigorate the system, rest and quiet for the weary, pleasure of many kinds for the vacationist, and associations which are charming in their relationships… At the north, one mountain which gave name to the town, rises gradually to the height of a thousand feet and guards, as a sentinel, the little village by the sea.” 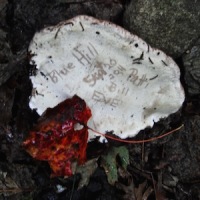 Emilie’s granddaughter Eve and her husband, Bill, hiked up Blue Hill with me before my wedding—as near to a bachelorette party as I desired. I’ve been up by myself and also with my husband. Sometimes, I meet people from the village or away. Other times, I have the summit to myself. I find a perch, eat a sandwich from my bag, and just look out, centered, at the top of Blue Hill.

Take the opportunity when you are near.  Once you’ve hiked to its top, Blue Hill loses its remoteness.  Solid but now also intimate, it is the village’s friendly guardian.