Sometimes, you have to be in the right mindset, the right place in your life, for a book to connect with you. For our guest writer, Judy, and Emilie Loring books, that time was in her twenties:

I was in my teens back in the late 1960’s, and my older sister, 13 years older than me, often came home on weekends from her teaching job in Pittsburgh, Pennsylvania.  She knew I was an avid reader and often suggested books she thought I might like. It was she who introduced me to the Anne of Green Gables books when I was eleven.

When she gave me some of her Emilie Loring books to read, I didn’t care for the rather stilted dialog and thought the descriptions were too flowery and not realistic.  You see, I was only sixteen, and Emilie Loring’s style of writing was not really in vogue. 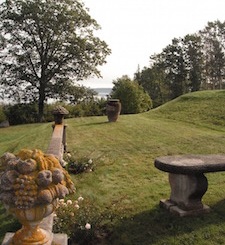 My sister told me that she liked them because most are set in the New England states and my sister had traveled there and was familiar with the region.  She told me about the lovely descriptions of flower gardens and stately old family homes and beautiful young heiresses, handsome men, mysterious happenings, etc.

Well, to my 16 year old mind, they were way too flowery and feminine.  After all, this was the era of the Beatles, political upheaval, rioting, hippies, mini skirts, bellbottoms, beads, LSD, etc.

By the time I was twenty and married, my tastes had changed, and my interests were more on things that were noble, dignified…and yes, flower gardens and interior design. So, I picked up an Emilie Loring book and began to read.
Soon, one after the other, I read all that I could get my hands on, thanks to the public library which still carried them and also thanks to various used-book stores I frequented. For the longest time, I kept a list in my handbag of the books I still needed to read, so I would have it handy should I pop into a used book store. I think it was probably about five years ago when I crossed the final title off my list.

I love the old, worn hardbacks.  I especially love when there is a name and a year they were received inside the front cover. My copy of Hilltops Clear was originally owned by an Anna Haffey, evidenced by that name in faded, thin, spidery writing.

In the years since, it ended up in McCook, Nebraska at a place called The Book Shop in the Keystone Hotel Building.  From there it somehow ended up in central Pennsylvania where I picked it up for ninety-five cents at a thrift store owned by the Mennonite church, called “Abundant Blessings.”

Over the years, when life becomes a bit much, I will often go to my bookshelves and pull out an Emilie Loring book to read.  There is something so comforting about reading of young women who are of noble character and are joyful, optimistic, feminine and loyal.

And I can say that Loring’s books definitely influenced me in a very positive way–from my desire to dress in a feminine way to my love for flowers to having afternoon tea.

Oh yes–back in the 1990’s, my husband even gifted me with a lively Airedale terrior.  Did I name him Charlie, you ask?  No, but it would have been a great name for him.

I am now a widow and a grandma, but I still dream of “perching” on a stone wall in the moonlight with the scent of flowers wafting through the air, the faint sound of dance music and tinkling china and the strong, comforting arm of a handsome gentleman at my side!
I can hear it, can’t you? – “the faint sound of dance music and tinkling china.” We become Emilie Loring’s characters as we read, see the world through their eyes, hear what they hear, feel what they feel. Their beauty, character, and optimism enters our daily lives, and whenever we need a fresh infusion, we know where to find it. Three generations, and now, a fourth, have that in common. Thank you, Emilie Loring.

“Kindred spirits are not so scarce as I used to think. It’s splendid to find out there are so many of them in the world.” Anne of Green Gables

3 thoughts on “Guest Post: I still dream of “perching” on a stone wall in the moonlight”