I think we’ve all had the feeling of being led to something, of being called by something.  It’s happened while researching Emilie Loring’s life–the urge to turn down an unknown street, and there is something I’ve hoped to find; the impulse to turn just one more page or take a book off the shelf that, for some inexplicable reason, seems to want me to open it, and finding something there that I want.

I have no explanation for this, but I know the feeling well. It feels ordained. 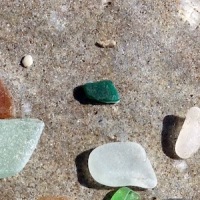 When I’m not looking for anything, sometimes things find me anyway. That happened in “Sea Glass and Storytelling:”

“Two summers in a row, I’ve found bits of the same, mysterious vessel.  The pieces are deep teal on one side, snow white on the other  I found two pieces the first year, and the next summer, three more washed up onto the same beach on different days, as if to say, “We’re still out here. Don’t you wonder about us?” I do.

(You can read the rest here.)

Today, I walked out onto the same beach, daydreaming about how I will tell people when I have finished the full manuscript of Emilie Loring’s biography. I watched eagles overhead, stooped to watch the tide on its way in, and scanned the rocks and pebbles for bits of sea glass that might have been carried in this morning. I thought about how I might want to celebrate, and where.

It was so beautiful. When the sun drops behind the trees, the sky turns cerulean, and the water sapphire.  Rocks which had looked bleached in the sun show their colors again. I could daydream out there for hours, watching the water, looking for sea glass.

I was only scanning the surface, not digging, but I spied a flat, oval rock near a patch of pebbles that just seemed to invite exploration. I picked up the rock, scraped away the top layer of pebbles, and there it was. Not a tiny shard like its relatives. Here was a quarter-sized piece of that same, deep-teal-and-white vessel, with a clue-giving but still-inscrutable shape. I actually said aloud, “Oh, hello!” as though it was a friend returning unexpectedly from a trip.

I think it’s good to go after them.