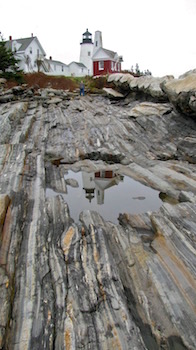 I can well imagine this as a quote from Pemaquid Point’s Lighthouse, standing sentinel for its one-hundred-eighty-first year on the coast of Maine.

You’ll find Pemaquid Point “just fourteen scenic miles south of Damariscotta,” as the locals say—or sixty miles north of Portland, for the rest of us. It’s remote enough to discourage swarms of tourists but simple enough to find when you want beauty and inspiration.

Damariscotta is the departure point from Highway 1, and I’d like to say we carefully checked out the nearby dining choices, but the truth is, we were hungry, and the Schooner Landing was right there. Lucky us, then, to enjoy delicious haddock on their waterside deck before setting out to explore.

The jewel on the peninsula is Pemaquid Point Lighthouse, out on the tip, but we stopped first at Colonial Pemaquid and Fort William Henry. Pemaquid peninsula was once “the frontier of New England,” and the English tried, repeatedly, to make it a center of trade and commerce. Over the years, settlements were destroyed by pirates, Indians, the French, and a hurricane. It may be that New Englanders learn this history in school, but it was news to me and well worth the stop.

Better success was made of the Pemaquid Point Lighthouse, commissioned by President John Quincy Adams in 1827 and built to its present form in 1835. Portland Head is more famous, but Pemaquid Point was voted onto the Maine quarter, the first lighthouse to appear on a piece of American currency.

A $2 admission fee gets you into the Keeper’s House, which houses the Fishermen’s Museum below and a weekly-rental apartment above. Climb the tower to see the 1856 Fresnel lens that flashes an automated light, every six seconds.

I admit to an enthusiasm for lighthouses that approaches mine for rocks and sea glass. I’ve loved them since I first watched Shirley Temple in “Captain January,” and I never enter a lighthouse without wishing I could tap-dance my way up the stairs. Nevertheless, I stepped sensibly to the top, rewarded by the old-time view and imagined ships at sea. 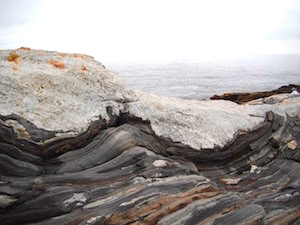 Romantic as it was, the more spectacular scenery was not in the distance but right at our feet. Pemaquid’s charm is in its geology, the rocks themselves—undulating, fractured, a record in stone of tremendous forces that shaped the Maine coastline. Sea-floor layers were turned to rock, bent and deformed, sliced by volcanic intrusions, thrust upward, and then worn by water, wind, and ice. Wear your scrambling shoes when you go, and be sure your camera has fresh batteries.

Next door is the Seagull Shop, whose peripatetic statues capture the spirit of the peninsula—several Indians, a pirate, and a giant, red lobster. (Ironically, the pirate keeps getting stolen.) There’s a gift shop inside, plus a lunch counter and small cafe. I’m a real fan of the “Lobster Tracks” ice cream (Don’t worry; it’s just vanilla with lobster-colored chocolate/caramel pieces) and, you guessed it, the lobster rolls. Seriously; you’re in Maine; it’s what you do.

Pemaquid Point’s stalwart beauty, history, fresh air, and sense of humor were perfect for us. We exchanged our marriage vows on a ledge below the lighthouse on a blue-sky, September day. I carried a nosegay of wild, sea roses, and we shared our lobster-roll wedding supper and an impromptu conga line with two attendants—Pirate and Lobster.

When you go, tell them we said, “Hi”—although the last time I checked Pemaquid Point’s 24/7 webcam, both statues were AWOL. Those partiers!