Ah, romantic summer! A season of weddings, beach picnics, and walking hand in hand… by the light of a silvery moon.

By the light of the silvery moon
I want to spoon
To my honey, I’ll croon love’s tune
Honey moon, keep a-shinin’ in June
Your silvery beams will bring love’s dreams
We’ll be cuddlin’ soon
By the silvery moon

Emilie Loring had reason to wax romantic about moonlight. She and Victor had an evening wedding, and when they stepped from the church and walked across Copley Square to their reception, they walked in moonlight. 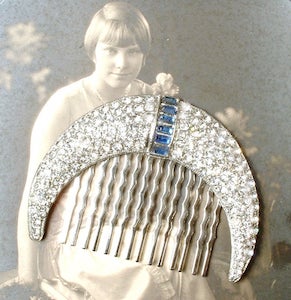 Through the 1920s, “silvery moon” branding was everywhere: fabric, vanilla, silk stockings… Dances were held under moonlight, and flappers wore silver moons on their headdresses.

But Fair Tomorrow‘s “Silver Moon Chowder House” wasn’t named for the song or even the moon.

“Silver Moon because of the roses with mother-of-pearl petals and golden hearts which climb over the walls in June.”

(To be fair, the Silver Moon rose was named in 1910, one year after Ada Jones recorded “By the Light of the Silvery Moon.”)

I think of red roses when I think of Emilie Loring’s stories–Templars, American Beauties–but the Silver Moon roses and the ones she carried in her wedding were white. In the language of flowers, white roses can mean purity, youthfulness, everlasting love, and, especially in this context, new beginnings.

Fair Tomorrow was the second of Emilie Loring’s novels with a theme of resilience. She started with Lighted Windows in 1930 and kept right on through the Great Depression with themes that encouraged readers to hang in there; things would get better: Uncharted Seas, Hilltops Clear, With Banners, We Ride the Gale! and It’s a Great World!

“Keep on keeping on, Pam. Things will straighten out. Things have a cur’ous unbelievable way of straightening out. When they get so’s it seems as though you just couldn’t bear ’em another minute, something breaks to clear them up. I’ve seen it happen over and over again. ‘Fair tomorrow!’ your Grandma used to say. “

Now seems like such a good time to re-read Emilie Loring–or read her books for the first time, if you haven’t before. She went through so much that we are experiencing now, and she had a knack for writing stories that let one escape the mess for a little while and return ready to pick up one’s responsibilities again with a fresh heart.

“The beautiful things in life are just as real as the ugly things in life,” she always said, and whether in the skies, the garden, or an Emilie Loring novel, there are silvery moons to light the way.