I sat down in a Denver coffee shop recently to visit with Tina Lewis Rowe. 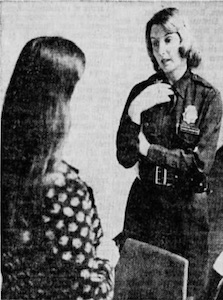 Tina Lewis Rowe, policewoman
Tina was the first woman to patrol the Denver streets in a police car. Twenty-five years later, she had worked her way to the rank of Captain. By the time of the Oklahoma City bombing, she was the President-appointed Marshal for the United States Federal Court District of Colorado. The procedures she set up when that trial was moved to Denver have been adopted nationwide for similar situations. She speaks, writes, consults and trains to share her expertise.

Tina is a woman of consequence.

She is also a longtime Emilie Loring reader. She read Emilie Loring books first in junior high school, checking them out at her small-town public library. Like many of us, she read the books over and over again over the years.

“Over my life I have owned several collections of Loring hardbacks and
paperbacks, then given them away and gathered more.”

Tina’s daughter grew up reading Emilie Loring books, and together, mother and daughter devised fun ways to enjoy their love of all things Emilie Loring:

“When my daughter was in her teens, we used to have pretend Emilie Loring dialogues. For example, I would stand by the fireplace, looking somber, and my daughter would come in the room and say, ‘Don’t look so sad, dar…….I mean, Cynthia.’

“One time I brought up the subject of making wise decisions about romantic
relationships. She said, ‘All I know is that he can’t be rich, powerful or
handsome.’ We laughed and decided that rich, powerful and handsome would
work OK.

“Our other Loring entertainment was to stand by the bookcase, so we could
remember the titles, and have conversations using as many titles as
possible.”

So fun! I infuse conversations with lines from Emilie Loring novels, too. The words just pop up sometimes, and non-Emilie-readers never know. Now, I definitely want to try the title game! I hear adventure calling, and if you give me one summer, I’m sure I’ll find bright skies and beckoning trails beyond the sound of guns.

We enjoyed tea with lemon (Tina) and steaming coffee (me), chatted our way through savory eggs and heavenly French toast.

Tina’s purpose, however, was specific. It will be a long time before she considers assisted living, but as suits a woman of action, she wanted to be sure her books got to appreciative owners.

“I’m not interested in selling them, I just want someone to enjoy them.”

“Some of them have the lovely covers I occasionally see on your website. I
was given those by a woman who was moving into an assisted living residence.
She bought them when she was a young married woman and said she tried to
make her home feel like an Emilie Loring home! She said she was mostly
successful, considering that she never had a cook or housekeeper, and she
felt it had made her life and marriage happier.”

I know the feeling. These become more than books. They are inspiration and reassurance. They are bonds between mothers and daughters, between sisters and best friends. They seem to respond to each stage of our lives. We love them like friends.

I drove away from that meeting last week with Tina’s collection of books in the trunk of my car. Mine is the joy and responsibility of seeing that they get to appreciative homes. In keeping with Tina’s wish, there will be no charge beyond shipping–and the promise to see that they are enjoyed.

I’m not sure exactly how that’s going to happen, but I’ll go as far as I can see, and then I’ll see further. Write to me with your ideas–in the comments below, on our Facebook page, or at:  contact@pattibender.com

Thank you, Tina. It’s a great world when keepers of the faith reach a certain crossroad, see a fair tomorrow ahead, and declare to all, “Here comes the sun!”  🙂

29 thoughts on “Free to a Good Home: Emilie Loring Books”

Leave a Reply to Peggy in IL Cancel reply