When I’m having a hard time getting started for the day, sometimes I browse. Browse is such a nice word, “an act of casual looking or reading.” I love to browse the stacks in a library, for example. I turn down an aisle marked “635 – Domestic Gardening” and end up in an easy chair, perusing the pages of Gertrude Jekyll’s Colour in the Flower Garden (1908).  The images are all black-and-white, but the topic is color, and I soon can imagine it, like we used to do when we watched black-and-white TV. 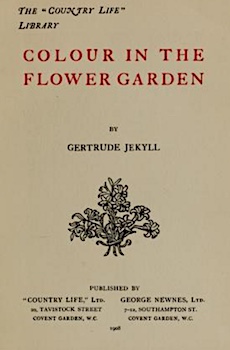 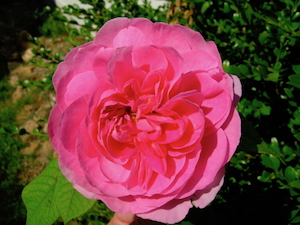 Jekyll wanted plants to form “beautiful pictures,” which is, of course, what Emilie Loring did with her garden descriptions. I feel pretty sure that Emilie read Jekyll’s work. She was an enthusiastic gardener, and I recognized the crescendos of color in Emilie’s gardens as the type that Jekyll suggested:

“…the whole border can be seen as one picture, the cool colouring at the ends enhancing the brilliant warmth of the middle.”

This was years ago, long before I imagined writing Emilie Loring’s biography, but this chance encounter with Gertrude Jekyll helped me years later, when I came upon photos of Emilie Loring’s gardens; I remembered that garden plants could be identified by their shapes and textures, even in black-and-white photos.

This past weekend, I browsed a page of the Boston Globe from April, 1934. What took me there was a review of Emilie Loring’s We Ride the Gale!

“Stormy indeed is this romance in which an amusing and thrilling adventure unroll at an old and luxurious estate with its hushed gardens, its mirroring lake and its acres of lovely woodland.” Boston Globe

But what attracted my eye next was the review of another book, Careers for Women by Catherine Filene–“a surprising variety of careers from which a girl may choose.” The original edition came out in 1920, when Emilie Loring was writing articles, short stories, and serial novelettes.

In a section about “literary work” for women, Helen Bishop Dennis (who reviewed books for the Boston Herald) described the work of literary editors and then remarked:

“I do not think it necessary to say more about the work of the literary editor, since, so far as I know, there are no women employed in that capacity on any of our newspapers. I believe there are no opportunities for the woman undergraduate to consider. One large newspaper I know of would not have a woman as literary editor because, as they said, “The publishers and booksellers would not take a woman seriously.” While this is irritating, and, personally, I do not agree with it, the facts in the case do warrant it somewhat. In ten years or so, of course, all this will be changed!

“Book-reviewing is a different story. There are many woman book-reviewers on the newspapers of the big cities… There is little advancement, so far as the newspaper is concerned. But good newspaper writing often leads to magazine work, and later to the writing of books.”

You may remember that Emilie Loring’s first professional writing was a book-review column for the Boston Herald in 1912/13. The literary editor who would have hired her was John Macy, the husband of Helen Keller’s teacher, Anne Sullivan. Agnes Edwards Rothery, though, was the person on staff who encouraged Emilie to try her writing wings.

“If you honestly want to write and think that you can, stop dreaming about it and go to work.” – Agnes Edwards

Under her maiden name, “Agnes Edwards” wrote daily editorials for the Boston Herald and became quite a household name. Like Emilie, she lived in Wellesley, and the two wrote their first novels around the same time–The Trail of Conflict for Emilie Loring, The House by the Windmill for Agnes Edwards Rothery.

Early praise compared Agnes to authors like Joseph Lincoln, Zona Gale, and Willa Cather, but on her second book, The High Altar, she ran into a buzz-saw of criticism:

“… the novel appears to crumble, the fabric somehow disintegrates… there creeps over the whole story an atmosphere of unreality.”

The words stung. She wrote in her column:

“Has any one who has not attempted it any idea of the magnitude of this task? Do they know that heroes and heroines pour out from the freshly bound covers of fiction with the unceasing congestion of crowds from the subway in rush hours? You cannot even meet–cannot even distinguish–a third, a tenth, of them. To be sure, you have the publishers’ word for it that each new maiden is a unique creation, original to the nth degree; never to be forgotten…

“For a full year now I have done my best. My endeavors have been fruitful if I am to judge by the fact that I, too, have written a novel, a modern novel, which has seen the light this spring…

“I am through. I have tried out the theory and I don’t like it. I am leaving the overpopulated shore with its flying foam and ripples and splattering spray and hurtling pebbles, and striking out again to that vast ocean of classic calm where one swims or floats hour after hour, in tranquility, with the sky of enduring art above one’s head and the sustaining waters of deep humanity beneath one’s drifting sense.”

The reviews for Emilie Loring’s second novel, Here Comes the Sun! were quite the opposite:

“This opens like the popping of a bunch of firecrackers and sparkles along through the whole plot. An excellently entertaining story.”

I like Agnes Edwards Rothery. She wrote honestly, and it’s worth seeking out her columns for ideas that still hold water.

It’s also good to realize how many wannabe novelists didn’t make it. You don’t see them, because, well, they didn’t make it. We follow Emilie Loring’s career from book-review columns to articles, short stories, serials, and novels as though the progression was natural, as though it was a path anyone with gumption and a modicum of talent could follow.

For every successful writer like Emilie Loring, ten fell by the wayside. Agnes and Emilie wrote their first novels at the same time, but Emilie turned a deaf ear to the “overpopulated shore with its flying foam and ripples and splattering spray:”

It’s also good to remember the environment in which they made their way. Women couldn’t vote when these women started writing, and most fields patronized them or didn’t allow them to enter in the first place–“there are no women employed in that capacity.” It took more than ten years, but by the mid-1940s, a woman was the Boston Herald‘s literary editor. Her name was Alice Dixon Bond, and Emilie Loring wrote for some years at the Boston Athenaeum on her membership ticket.

If you’ve seen the movie “Desk Set” with Katharine Hepburn and Spencer Tracy, you may remember that Hepburn’s powerfully intelligent character is incongruously called “Bunny.” She runs a reference service that answers people’s questions over the phone, and Tracy’s character is hired to see if a computer can do the work she does. One line sticks with me, one with which I identify: “I associate many things with many things.”

That’s what happens with browsing. Left free, little snippets of information connect and lead you to ideas you didn’t plan ahead of time–but hang onto them. You never know when they will lead you to the next insight–or story.

7 thoughts on “Browsing to Connection”