If you follow my Facebook page, you may already know that I had a little scare last week. I tried to open Happy Landings on my computer and got an error message: The file could not be opened, either because it was not found or had been corrupted.

How far can someone’s heart sink in an instant?

I rallied my senses, and as I corrected the problem, I reassured myself with the preparations I have made against just such a disaster:  My MacBook auto-saves my work in its Time Machine every little while, so I can go back to an earlier moment when my files were available and unharmed. I save Time Machine to an external hard drive, and I also save all of my computer files to the Cloud via a separate service. Of course, I have kept every every note, every photograph, every letter, in my physical notebooks.

The Emilie Loring materials I protect are mine alone. Bits are contained here and there, where I found them, but the process to bring them together took nearly twenty years, and I’m not taking any chances. Last month, when I drove my entire Emilie Loring collection from Colorado to Kansas, I left the external hard drive behind; if the worst should happen, the digital contents, at least, would survive. When I got to Kansas, I bought another backup hard-drive to serve until the other is delivered.

These methods weren’t available to Emilie Loring, but she saved what mattered to her, for a very long time. When she closed the apartment on Beacon Hill after her husband’s death, she took her collection to her old house in Wellesley Hills, where her elder son, Robert, lived with his wife and two daughters. Emilie died, decades passed, and what remained of her possessions in Wellesley Hills eventually came into her granddaughter Eve’s possession. Thankfully for us, Eve decided to donate a portion of them to create a permanent, Emilie Loring archive at Boston University’s Howard Gottlieb Archival Research Center.

I wonder how many boxes her collection filled at Robert’s house. In addition to U.S. copies of all of her books, there were editions in Dutch, Hebrew, German, and French. (It must have been fun to read through those!) There were dust jackets for twenty-eight of her thirty novels, plus book reviews and newspaper articles about her life and career.

I was both interested and curious to learn that no one in the Loring family owned a copy of her very first book, For the Comfort of the Family: A Vacation Experiment. Correspondence showed that Robert tried to locate one after his mother’s death, but he came up empty. There was no eBay then.

“Printed Items” in the Emilie Loring archive include portions of nearly forty published stories, clipped from their original magazines. “Business Documents” and “Correspondence” are mainly professional but include fan letters, most of which were written after 1951. That’s something to remember, if you visit her archives. The collection includes everything “Emilie Loring,” including novels, short stories, and ephemera produced after her death and saved by her sons.

“What papers were there, Molly B.?”

Especially interesting to me are the drafts. Indeed, two-thirds of the collection are  manuscripts, sometimes in multiples, of books, novellas, short-stories, and articles. Why did she save them? Couldn’t they have been discarded as soon as the final drafts were published?

Only if you weren’t their author.

By the time a draft is finished, it has occupied hours, days, and months of an author’s mind. Writing can be easy, but sometimes it is hard, and she fights and dies over a passage, digging into memory, fighting off distraction and discouragement, testing herself against the prose, again and again. By the time she is finished, she has left a part of herself in the pages, and who would throw a part of oneself away?

As her biographer, I love the ability to peek into Emilie Loring’s creative process, see “Zowie!” turn to “Great Scott!” and suicide turn to murder in the game house. These are observations that couldn’t happen, if the drafts were tossed.

I’m also glad for the saved transcripts of radio interviews where we learn about the moment she decides to send Tim Grant up the stairs instead of down. That change set her imagination back to working so effectively that she put a sign above her desk, “When stuck, reverse your engine.” 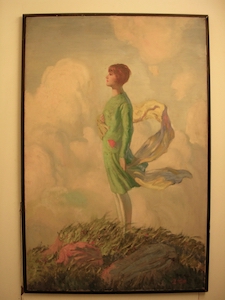 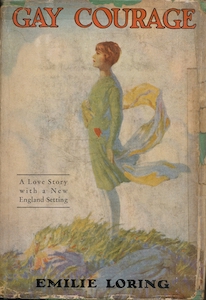 Still, her archive at Boston University represents only a portion of what Emilie saved. Divided amongst the family were her jewelry, original art for her books, and family photos.

“Paintings which had been designed for the jackets of Molly Burton’s books lent color–and an occasional touch of gruesomeness–to the cool, gray walls. There were full-page ads, photographs of the author along the years, framed letters from three world-famous persons who had taken time from their crowded lives to tell her they had read all night to find the solution of a mystery only to discover that they had guessed wrong as to the murderer, letters that would be as well worth stealing for the signatures as some of her jewels.”  Beckoning Trails 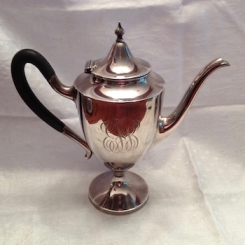 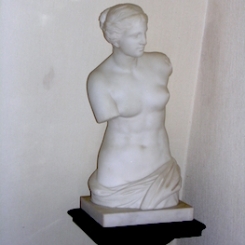 There were books from her personal library, her silver boxes, silver service, chinaware, linens, and statuary. Each of these survived moments of decision: Has it served its purpose, or does it still matter to me? Are these memories I want to continue?

A crystal and gold clock she had brought from the Cambridge house was on top of shelves which held her favorite books; they were the ones to which she had turned for refreshment and renewed courage when life had seemed so deadly monotonous.  Each one of the silver boxes on the tables took her back to the place where she had acquired it.  She could see the very spot in an Arts and Crafts Exhibit where she had bought the oval with the red carnelian set in the cover.  I Hear Adventure Calling

Families make these decisions all the time, and each time the decision is made to let an item go, a little part of history goes with it.

… a Renoir that Sally had brought from Paris, a gorgeous rug on the floor she had bought in India; the end of a piano; a portion of filled bookshelves, all of light wood,  highly polished; a red teakwood table laden with ivory carvings from China, and silver boxes from everywhere…  Bright Skies

That’s going to happen, of course. Each of us has our own history, and it is hard to know and appreciate the histories of others, the meaning they gave to events and belongings. But that is my goal for Happy Landings: The Life Behind Emilie Loring’s Stories.

Time goes forward, some memories get left behind, and some scatter to the winds, available to be gathered in again, should someone take the time to find them.

Could you save someone’s story and pass it along? Start thinking about that.

4 thoughts on “The Histories We Keep, the Stories We Share, Part I”