Best-selling novelist Emilie Loring signed the contract for a “work to follow Beckoning Trails” with no idea what she might write about next–only that she would. She knew that it wouldn’t take place in Boston or Blue Hill. After the death of her husband a few months before, she needed time away, time in a new place with new ideas, time to gather herself together.

“It is only for the summer. When fall comes I will have a brand-new outlook, will have recovered my sense of direction, will know what I want to do with my life.”  I Hear Adventure Calling

It was vacation season and the town was a paradise for vacationists who liked the sea. They were sprinkled over boardinghouse lawns, perched on boardinghouse rails, crowded the street in every variety of sports clothing.

Ogunquit is south of Portland and occupies both bluff and beach. Featured on the cover of The Saturday Evening Post that summer of 1947, the seaside town lured artists, authors, and summer vacationers. 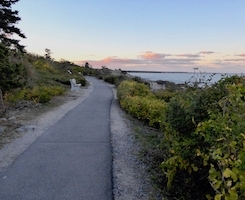 Chief among Ogunquit’s attractions is the Marginal Way, a mile-long walk along the prominent cliff between Ogunquit Beach and Perkins Cove.

This is what it feels like to be a seabird, a poet, a pirate, on top of the world. To take a vertiginous walk on the edge of beauty, high over the ocean, while waves pound rocks into sculptures far below, and toss starfish and tiny shells into tidal pools scooped out like cauldrons brewing the ultimate plateau de fruits de mer. Take a deep blue breath of Atlantic air and step onto the Marginal Way, which winds from Ogunquit Beach to tiny Perkins Cove…

Emilie walked through the garden of her hotel, still unsure what she might write about, when another guest challenged, “What can a writer find to write about here?”

Emilie replied, “Can’t a writer get a story wherever there is human nature?” And off she went to prove it.

In the story that became I Hear Adventure Calling, Fran Phillips leaves Boston for the Maine coast in search of adventure.

“I have lived such a tight little life for the last few years that I want to get away. Besides, I hear adventure calling.”

Emilie wove elements of Ogunquit into her story. 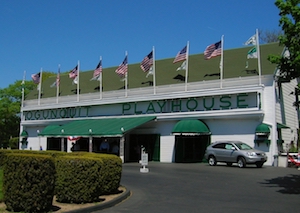 She attended the Ogunquit Playhouse, now on the National Register of Historic Places, and so did Fran.

The gay comedy had left the audience refreshed and rested, its problems pushed into the background.

Several small galleries in the art colony at Perkins Cove suggested Fran’s new position. As a sales assistant for the Sargent Gallery, she is soon embroiled in the mystery of a missing painting.

The work was intensely interesting, the contact with outstanding achievement stimulating. Keeping in step with this job would leave no time for fear.

There’s a definite sense that Fran and Emilie are the same in this story. Emilie’s  trademark optimism is challenged by fears, and no wonder. At eighty-one, her best and closest supports–her parents, siblings, and husband–had all died. She had left Beacon Hill and her beloved Boston to move back into the house in Wellesley Hills where she had raised her children. Her elder son, Robert, lived there now, but she missed Victor’s easy company, and she wasn’t ready to become a back number.

With twenty-seven novels to her credit, she set herself the goal of at least three more and headed on her own to the Maine coast where she’d always found strength and inspiration.

Like Emilie, Fran chafed at being under someone else’s control. In her case, that was Myles Jaffray, appointed her guardian until her brother could return from postwar duty.

“The new trustee can’t hold back my income due September fifth if I sidestep meeting him, can he?”

But Myles proved both a good companion and a steady helpmate in her plan to conquer fear.

“Keep your imagination on leash. … Each time you allow fear to get you it will be more difficult to keep the next crack under control. You lived through the war when Ken was in the thick of the fighting, didn’t you?”

“While on the subject I will observe that I am a matrimonial prize; expert dishwasher, as a cook I have a few specialties, and note this, I have never acquired the newspaper-at-breakfast habit.”

Her appreciation for her marriage to Victor inspires an extended passage:

“If a couple goes into marriage knowing that adjustments are bound to be tough, that the going may be plenty rough in spots, yet, believing it to be the great adventure, that the rewards in companionship, in sunny stretches of road, in shared laughter, shared intimacies and interests will overbalance the hazards, such a marriage ought to result in a genuine till-death-do-us-part relationship and that is the only one I will settle for.”

You can almost feel the sigh as the fog lifts from Fran’s–and Emilie’s–spirit.

“I love life, but when I get up in the morning feeling so sour that I take the sunshine out of the day for everyone I meet I hope the good Lord will remove me from this earthly scene.”

The beautiful things in life remained as real, as enticing. 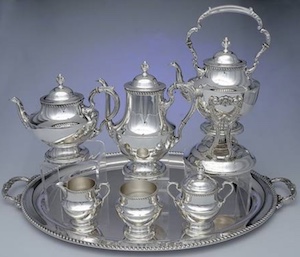 She seated herself at a table equipped with choice old Georgian silver, pale yellow china of paper-thin delicacy, and a tall frosted-glass pitcher and glasses.

“You dance like a dream,” he declared after they had circled the room. “Like it, don’t you?” “Love it. Always have. Always will.”

“Always have. Always will.” Emilie Loring had lived through many challenges and a number of dark periods in her life, and her sunny philosophy always found a way through it.

I like the way she signed her personal copy of I Hear Adventure Calling when it was published:  “Emilie Loring. Her book. October 16, 1948.”

Her book. She signed a contract to write another.

Nothing so restful as a decision, it cleared the way for the next move.

9 thoughts on “I Hear Adventure Calling”