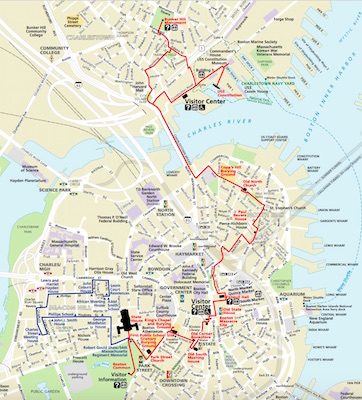 I wish I could take you with me on a walking tour of Boston and point out places that have Emilie Loring background stories.  But I’ve figured out a shortcut:  Boston’s Freedom Trail.

The Freedom Trail wanders through old Boston with seventeen stops to view historic sites.  You can go with a guide or pick up a free brochure and guide yourself.  The route is marked in red on maps and actually marked red on the streets and sidewalks, too, so it’s easy to follow.  When you go, take this post with you.  We’ll let the Bostonians point out the famous historical sites; I’ll share the Emilie Loring extras.

With her eyes on the gleaming gilded dome of the State House… she mentally rehearsed her approach.  As Long As I Live

We start at the Boston Common and make a short jaunt to the golden-domed  Massachusetts State House.  But instead of doubling back to see the Park Street Church, we’re going to follow Beacon Street east.  Don’t worry, we’ll meet back up with the trail at the next corner.  But first, we want to look at the Hotel Bellevue, reincarnated as a modern condo at 21 Beacon.  Emilie Loring lived here several times, especially in her later years.  That made sense.  She used to walk 1/3 mile from her home on Chestnut Street (See: “Enjoy a Day in Emilie’s Boston Neighborhood”) to write at the Boston Athenaeum.  From the Hotel Bellevue, it was just across the street.

The Boston Athenaeum‘s precise address, 10 1/2 Beacon, suits “one of the oldest and most distinguished independent libraries and cultural institutions in the United States.”  If you want to see where Emilie Loring wrote most of her books, you’ll need to buy a membership or pay for a tour and go up to the elegant–and absolutely silent–fifth floor.  There are cubicles on both sides of the room, and Emilie generally sat looking southwest, over the Granary Burial Ground.

“Your mother gave me a reading-privilege at the Athenaeum. The place drips culture. Shelf after shelf of books, floors of them. Rows upon rows of plaster busts. Whiteness. Stillness. Flowers on all the service desks, bowls of them. A portion of Washington’s library. Sun streaming in at long plant-filled windows. Iron-railed balconies from which one looks down on the peace of the old Granary Burying Ground with pigeons flitting round its slate head-stones.”  As Long As I Live

Granary Burial Ground – Across the street from the burial ground where Paul Revere and Samuel Adams are buried is the Tremont Temple.  Charles Dickens gave readings there, and Emilie’s father later worked with him to publish a compilation of his works.  Dickens stayed next door at the Parker House, now the Omni Parker House Hotel, which has a long history of famous guests.  Emilie’s friend Louise Hallet earned a ribbon at the Barnstable County Fair for making the “Parker House rolls” that originated here.

King’s Chapel and Burying Ground.  Emilie’s friend Clara Endicott Sears would have had a greater interest in this church and cemetery on the opposite corner of School Street and Tremont.  Descended from six Massachusetts governors, Clara’s most famous ancestor, John Winthrop, is buried here. 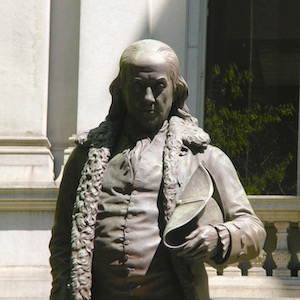 Ben Franklin statue, Boston Latin School– Emilie’s grandfather Albert Baker had something in common with Benjamin Franklin: both were printers when it was still a little radical–and dangerous–to be one.  Franklin’s statue stands in front of the Old City Hall, and George Baker had his first books printed in a shop that was directly across the street.  Emilie’s husband, Victor, and her brother, Robert Baker, both graduated from the Boston Latin School.  Victor commanded its schoolboy battalion in 1878.

Old Corner Book Store – The Old Corner Bookstore is a stalwart symbol of Boston’s love of books.  One of its early owners was James Fields, who advised Thomas Wentworth Higginson not to write his now-famous history book for children.  Luckily, Higginson ignored the advice, and the sales helped pull George Baker’s publishing firm, Lee & Shepard, out of bankruptcy.

Old South Meeting House – You’ll be corrected, if you call this the “Old South Church,” but that’s just what it was called in the late 1800s. Firms on Boston’s Washington Street used to state their location relative to the Old South Church, but as the publishers’ reputation grew, that changed to, “The Old South Church is directly opposite Lee & Shepard’s Bookstore.”  Their later store, behind the meeting house at 10 Milk Street, was razed to build the huge “Old South Building” that looms over the meeting house now.  Victor Loring had his law office in the Old South Building for most of his career. 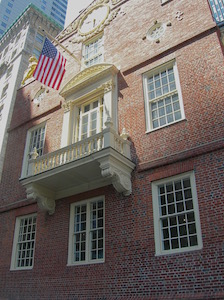 Old State House, Site of the Boston Massacre – Iconic events are associated with these two sites–the first reading of the Declaration of Independence from the Old State House balcony and the “Boston Massacre” that fueled colonists’ anger in 1770.  The famous watercolor of the event was painted by Paul Revere and his partner, Christian Remick, a distant cousin of Emilie Loring.  Together, Revere and Remick painted some of the earliest views of Boston.

Faneuil Hall – Emilie’s father clerked for a  publisher named Benjamin Mussey who joined with others and signed a bond to release Antony Burns, the “fugitive slave.”  The effort failed, and a violent demonstration broke out at Faneuil Hall on May 26, 1854.  Mussey’s health gave out soon after, and George Baker took over for him at the publishing office.

Some people come to Faneuil Hall and only find the  souvenir stands and lobster rolls (which are never a bad idea!), but enter at the opposite end of the building–through a door with precious little signage–to see its magnificent, public hall.  There are park rangers on hand who know a lot about its history.

The Freedom Trail leaves Faneuil Hall on Union Street and winds past a small park across from Boston’s City Hall.  This area used to be Dock Square, where Emilie’s grandfather, Albert Baker, worked on an early Boston newspaper.  His son, Albert Baker, Jr., died when he was only eleven and was buried in the Friends’ Burying Ground which was also near here, on Congress Street.

Next, we cross into Boston’s “North End.”  When the Bakers arrived from Portland in 1842, the population here was largely Irish.  Now, the North End is known as “Little Italy,” filled with cafes and restaurants serving pastries, espresso, and pasta.

At the corner of Hanover and Parmenter/Richmond Streets, the Freedom Trail turns right, toward the Paul Revere House.  For now, though, take a left onto Parmenter and a right onto Salem.  Almost immediately, you’ll come to Cooper Street and see L’Osteria Ristorante on the corner.  The back of the restaurant is at 2 Cooper Street, where Emilie’s grandfather Jerome Boles lived.  Down the street further, at 11 Cooper, is the home of her great-grandfather John Boles. 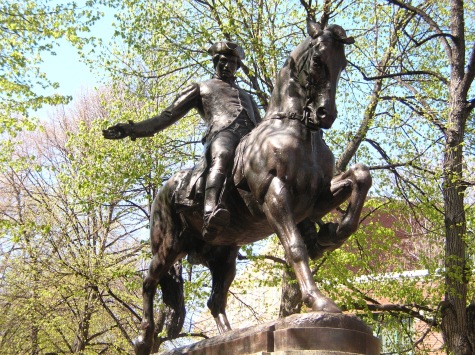 I’ve always wanted to know the Boston of Paul Revere, the Tea Party, Longfellow, Emerson, and the Alcotts.  As Long As I Live

Bunker Hill Monument – Emilie and I both had ancestors on the scene for the losses at Breed’s Hill and Bunker Hill but no stories to pass down.  Oliver Wendell Holmes filled the void with a children’s book he published when Emilie was nine.  Grandmother’s Story of the Bunker Hill Battle–As She Saw It From the Belfry begins:

‘Tis like stirring living embers when, at eighty, one remembers

All the achings and the quakings of “the times that tried men’s souls.”

Of the heroes made at Bunker Hill, Dr. Warren was most beloved.

Tell him here’s a soldier bleeding, and he’ll come and dress his wound!”

Ah, we knew not till the morrow told its tale of death and sorrow,

How the starlight found him stiffened on the dark and bloody ground.

Three generations of Warren physicians later, a great-grandson, Dr. J. Collins Warren,  who was the Chief Surgeon at Massachusetts General Hospital, amputated the leg of Victor Loring’s brother, Charles Francis Loring.  Encouraged by initial signs, Emilie and Victor went ahead with their plans to be married the next month, but Charles could not attend.  He died two months later.

“The enemy was hovering on the coast with a formidable fleet, which ever and anon looked into our harbor with blood shot eyes…the largest mercantile houses had failed; their vessels were decaying in the docks; the grass was growing upon the wharves, and universal bankruptcy seemed the doom of the place.”

A 1920s print of the U.S.S. Constitution hangs in my living room, the prize for a 25-cent donation to its renovation fund.  Nearly one hundred years later, the ship is still kept seaworthy.  I love that.

The Freedom Trail ends here.  I like to ride the MBTA Water Taxi back and head straight to the Sail Loft on Commercial Wharf for–you guessed it–a lobster roll and a glass of wine.

But let’s take one more little side trip on our way back to the Boston Common.  The easiest way is to take the MBTA Blue Line from the Aquarium to Bowdoin Square.

Except for the station’s name, Bowdoin Square is gone.  The Revere House Hotel used to be there, and across the street from it was a Baptist Church.  Behind the church, on a street that’s now gone, too, was 5 Chardon Street, where Emilie Loring was born (top star, below).

A lot of us grow up in one place, live in another–or several more–and then go “home.”  Emilie did that with Boston.  She grew up on the Freedom Trail and returned to it again and again.  Emilie Loring had many more associations to tell of places and people and their stories; her books are full of them.