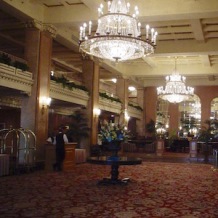 The first time I visited Boston, I stayed at the Boston Park Plaza Hotel on Arlington Street, a bit south of the Public Garden.  An elegant affair from yesteryear, it had the right atmosphere for discovering “all things Emilie”–uniformed doormen, plush carpets, chandeliers, and afternoon tea served daily.  It felt right.  After exploring Emilie’s Beacon Hill neighborhood, I set out to discover the “Back Bay” where Emilie lived from the time she was six until her first son was born.

It’s hard to imagine now, but when Emilie’s grandfather moved to Boston, the west edge of the Public Garden was essentially the “beach,” and the area beyond was underwater.  It took years to fill in the low areas to support neighborhoods, but when it was done, the Bakers joined the exodus from the crowded North End to the spacious Back Bay.

I walk westward on Boylston Street, pleased with how easy it is to know which cross street comes next.  They’re in alphabetical order:  Arlington, Berkeley, Clarendon, Dartmouth…

My first destination is Trinity Church (Episcopal) on the east side of Copley Square,  elaborate with statuary and architectural detail.  One statue is of Phillips Brooks, Trinity’s charismatic, first rector, who wrote the Christmas hymn, “O, little town of Bethlehem.” I wonder if there was an event in Emilie’s childhood that made it special to her.  When there is a Christmas scene in one of her stories, she often includes it.

The “square” of Copley Square is an open, grassy park.  Along the edges are trees, benches, a fountain, and on certain days, stands of street vendors selling flowers, produce, and art.  Art is a central theme here.  In fact, Copley Square was originally called “Art Square” for the Museum of Fine Arts on its south side, where the Copley Plaza Hotel is now (above, flying the American flag). 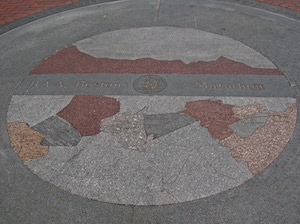 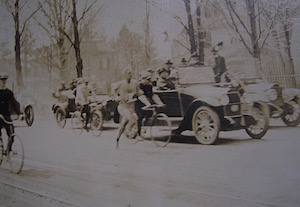 There are a lot of “then and now” examples at Copley Square.  Near the corner of Boylston and Dartmouth is the finish line of the Boston Marathon.  The Lorings watched the 1917 race which New York bricklayer Bill Kennedy won with a time of 2:28:37.  I love the Lorings’ photo, which shows Kennedy running alongside roadsters and men on bicycles.  The turning point of the race was in Wellesley, and I wonder if that’s where this was taken.

Across Boylston Street, between Clarendon and Dartmouth, is a row of the usual, city businesses–a  pharmacy, liquor store, restaurants, a bank– but that is where the Second Church was until 1914.  Emilie and Victor were married there by the Reverend Edward A. Horton, on a night that she described in We Ride the Gale!

What a night! The half moon hung in the sky like a broken silver plaque against an indigo velvet canopy sprinkled with gilt stars above shadowy ridges of hills. The earth was lightly clothed in bridal white.  We Ride the Gale, p. 186

Their reception was held at the Hotel Huntington, where Emilie had been living with her mother and sister.  The Hotel Huntington was across Copley Square in a triangle created by diagonal Huntington Avenue.  There are condominiums there now, framed in this photo by the Westin on the left and the Boston Public Library on the right.

The Boston Public Library is another “then and now” place.  When Emilie was little, the public library was on Boylston Street.  The McKim building opened in 1895, and the more modern, Johnson building was added in 1972.  A newly renovated “BPL” is set to open on July 9th, 2016, open and airy, outfitted with modern technologies. 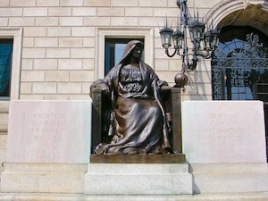 But the original McKim building, facing Trinity Church, is my favorite building in all of Boston.  I walk between the “Arts” and “Sciences” statues and enter at the east doors.  Directly ahead is the grand staircase, guarded by lions commemorating Massachusetts’ volunteers in the Civil War.

She tucked her note-book into the green bag which matched her hat, passed the noble lions of St. Gaudens guarding the landing, ran down the broad yellow-marble stairway and fared forth into the street. As Long As I Live, p. 82

A window at the top of the first flight looks out over the library’s secluded courtyard.  Murals lead up the stairs to the Bates Hall reading room.  It is one of the best-known examples of “space and place” design in the country–giving the reader a feeling of both privacy and openness.

Two hours later, seated at one of the tables in Bates Hall in the Boston Public Library, she snapped the rubber band about her note book and for the first time since she had sat down regarded other persons at the table under the green-shaded lights. As Long As I Live, p. 81

I can’t do justice to the “BPL” here, but trust me and visit.  You won’t forget it.

Across Boylston Street from the Boston Public Library is the “New Old South Church,” yet another fabulous church building in the Back Bay.  The funeral of Victor’s brother Selden was held here in 1892.  Thanks to reader Lisa Greiner for this photograph, which she took on her Emilie Loring trip to Boston with her mother.

I could walk all the way to Fenway, but in the interest of time, I descend into the MBTA subway stop at the corner and take the Green Line to Kenmore Station.  Another half mile, and I’m there.

We all know Fenway.  Its website says, “Though generations have come and gone, Fenway Park remains, much like it did the day it opened on April 20, 1912.”   I appreciate the sentiment, but I also acknowledge a few changes since the Lorings’ photo of the first game of the World Series on October 7, 1916 when the Boston Red Sox beat the Brooklyn Robins, 6-5.  What a treasure!

I go back to the subway’s Green Line, but this time I get off at Hynes Convention Center and walk a half block north to 44 Gloucester.  The Bakers moved here when Emilie was nineteen.  It’s the last place they lived before her father fell ill and the home where she and Victor had their first son, Robert.  I wonder if Emilie’s unit still has an iron balcony and a small garden at the rear.

Further up the street, at the corner of Gloucester and Marlborough is Victor Loring’s old house.  Emilie and Victor weren’t neighbors, because the Lorings moved out before the Bakers moved in.  But both families kept their houses awhile after they moved, and I wouldn’t be surprised if their paths crossed during that time.  I wish Emilie had written about that!

Heading back to the Public Garden, there is no wrong choice.  Newbury Street is lined with shops and restaurants and home to the New England Historic Genealogical Society where I have done lots of research.  And Marlborough Street is absolutely picturesque with its brownstones and private gardens.  But I choose Commonwealth Avenue with its central mall of grass, statues, and walkways.

One of Emilie Loring’s good friends was Clara Endicott Sears, a Boston Brahmin of considerable means.  She stayed often at The Vendome hotel on Commonwealth during her early twenties and again in old age.  It was the most expensive hotel in the Back Bay at the turn of the century–five dollars per night.

Clara watched in fascination as theater people came and went from the hotel, laughing and boisterous, the very opposite of her Boston reserve. She kept scrapbooks of their photos, newspaper articles, and theater programs.  Just think  how fun it was for her to meet Emilie, who had known the people of her scrapbook as family friends.

I walk north to Beacon Street and east to Berkeley to see the Sears mansion.  Like Emilie, Clara lost her father when she was in her twenties.  She and her mother lived all “alone” in this home for thirty years–well, except for their seven servants.  How did they manage?!

I’ve arrived back at the Public Garden, this time at the northwest corner.  The “Cheers” pub is across the street, but I know a little place down on the Boston waterfront that serves incredible lobster rolls.  Lobster wins.  On to the Boston Harbor! 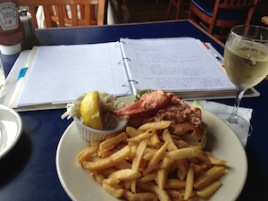