“Wanted: by two persons, old fashioned Thanksgiving dinner. Anywhere on Cape Cod.”  This line in Fair Tomorrow starts the Thanksgiving holiday for me. On a day set aside for gratitude, my thoughts turn sentimentally toward family, the warmth of traditions, and especially the Thanksgiving meal. We know food is not the point of Thanksgiving, but it is the vehicle for much that is.

Thanksgiving meals are like family albums. Mine includes my mom’s stuffing recipe served on my grandma’s china, lingonberries in honor of my Swedish heritage, and Emilie Loring’s sparkling cider. Yes, Emilie’s traditions have worked their way into my family’s celebrations, absorbed from numerous readings of her best Thanksgiving story.

Emilie Loring excels at descriptions of scenery, and the two years that her family lived on the Cape enrich her story. 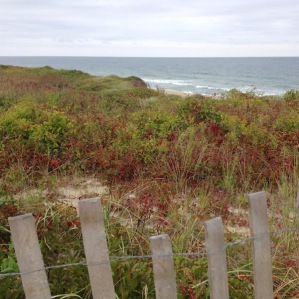 Purple shadows from drifting clouds cast curious patterns on the sand dunes.  A rising breeze was kicking up white caps, which looked as if the sparkling blue and green sea had acquired a passion for lace ruffles.  Fair Tomorrow

But when she starts in on food, hold on to your willpower.

With the opening door came a potpourri of savory scent: roasting turkey, sage, oyster stuffing, crisping sausage, onions, spicy mincemeat… Big, plump oysters with crisp curls of bacon, sizzled in their own juices as she arranged six of the hot shells around a frilled half of lemon rosy with paprika, on a doily covered plate. She sniffed. Done to a turn. Luscious smell.  Fair Tomorrow

I was raised in the Southwest, so there was no chance that oysters would figure into my Thanksgiving meal, but Emilie’s menu calls for them twice, once in the appetizer and again in the turkey stuffing. That was only natural for her family, which arrived in New England in the 1600s and remained along the coasts of Massachusetts and Maine thereafter. In the olden days, oysters were so plentiful and cheap that they served as filler, to stretch the turkey. My ancestors migrated inland and omitted the mollusk; our dressing is done when we’ve added the butter, onions, celery, and seasonings.

Personally, I’ve striven for potatoes like Emilie’s ever since I read her description:

Who wouldn’t want potatoes of “swansdown delicacy?” I’ve made them slightly gelatinous, occasionally a little grainy, but those times when they can actually be “fluffed,” I breathe a sigh of culinary satisfaction.

And then there’s the cider. As a child, I drank milk at all meals, and as an adult, I have frequently enjoyed a glass of wine at friends’ tables. But when I established my own home and cooked Thanksgiving dinner for my children, I adopted Emilie’s idea of sweet cider.

“Cocktails! Grandmother Leigh always served sweet cider! Thought that was as important with a Thanksgiving dinner as the turkey…” Fair Tomorrow

Emilie’s maternal grandmother was born in Hollis, Maine (near Portland) at a time when hard cider was considered safer to drink than water. When Emilie’s grandfather sank into alcoholism, hard cider was exchanged for sweet, and my family took it a step further by adopting the sparkling version. Festive and light, it bubbles cheerily in our glasses. When our local store had none one year, we substituted sparkling Catawba and Cold Duck, and both were such successes that we now offer, “Red or white?” Hard, sweet, or sparkling, cider holds a place on our table, a reminder that traditions, like stories, change with each repetition.

As much as I love Emilie Loring, I approach her recipes with cautious optimism. Toast points spread with anchovy paste and topped with fluffy, scrambled eggs were decorative but decidedly off-putting. On the other hand, her bran muffins have become staples, moist and comforting.

This year, I’m going to try another of Fair Tomorrow’s suggestions. Emilie was always experimenting with new ways to dress up cream cheese balls that she mixed with a little cream and a few chopped nuts and then sprinkled with paprika. She served them atop orange rounds or pineapple, garnished with pimiento, or stuffed into figs or dates. In Fair Tomorrow, they were stuffed into dates and served atop “pale green lettuce and perfect segments of chilled grapefruit.” I bought the figs tonight—pale, alien-mushroom-looking things—but I have hope that they will fulfill Emilie’s prediction:

Figs stuffed with these same cheese mixture make a salad accessory which will cause even an ascetic’s eyes to blink. For the Comfort of the Family

In a society that rushes and loves all that’s “new,” Thanksgiving is a time set apart. My daughter recently asked for my pumpkin muffin recipe, but she didn’t want just the directions; she wanted a photo of the actual recipe card we’ve used for ages—bent, batter-spattered, much the worse for wear, and somehow the dearer for it. That spirit is the essence of Thanksgiving:  not only to enjoy the present meal but to appreciate it–and all of our gifts–in full and loving context.

Have a warm and appreciative Thanksgiving week and remember to pass along a story or a recipe for posterity. From my home to yours, enjoy a batch of pumpkin muffins. 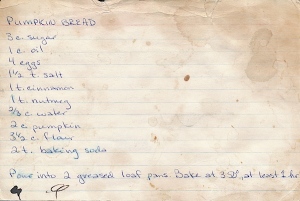 (Bake 16-18 min, may substitute applesauce for all or part of the oil)

3 thoughts on “Thanksgiving on the Cape”