My father was born during the Spanish Influenza pandemic of 1918. Just over one hundred years later, my granddaughter will be born during the COVID-19 pandemic. This reflection sent me to look through the Boston Herald of 1918 to see how things looked for Emilie Loring during the crisis.

Quarantine and self-quarantine are all over the news right now, so I searched first for “quarantine” and sorted the results from oldest to newest, January 1st to December 31st, 1918.

World War I still raged overseas, and recruits came to serve from all over the country. To prevent transmission of communicable diseases that they were bound to bring with them, every recruit was quarantined for 14 to 21 days.

Before vaccines, quarantine was the go-to method of disease containment. The Navy medical bureau kept track of illnesses as they spread, to assess the need for action. Decades before computers, they used a huge wall chart with colored map pins to show where each case of each illness had been identified.

Notice, there is no mention of influenza. Emilie’s son Robert was stationed at Camp Dix, where the entire camp was under quarantine for measles. A Connecticut college announced a quarantine to contain diphtheria. In April, an outbreak of scarlet fever prompted quarantine at Camp Devens, and a case of leprosy prompted yet another.

Knowing what we know now, this article from August 17, 1918 made an impression:

NEW YORK – Eleven more cases of Spanish Influenza, or whatever it is, were reported at quarantine today from a ship arriving from one of the Scandinavian countries… “There is not the slightest danger of an influenza epidemic breaking out in New York,’ said Dr. Cofer, port health officer, ‘and this port will not be quarantined against that disease.”

Three thousand took sick at Camp Devens, and civilians were barred from entering the base hospital, but still, no quarantine was enforced. Soldiers lived in close conditions; of course the flu spread more quickly there. Public statements still played down the threat to the public.

A small percentage of the camp occupants caught the contagion, and a large proportion of the soldiers and officers, including a colonel, were able to “throw it off” without requiring hospital treatment.  (September 17, 1918)

“It would seem that while the number of deaths at this time is unfortunately large, there is no need of undue public apprehension.” (September 19)

But actually, Spanish influenza had spread to every state, affecting every age and population. By early October, local health boards were given permission to declare quarantines of households with influenza cases.

But even with the experience of France and England at our disposal, the seriousness of this influenza outbreak was not fully appreciated until the situation was beyond local control.  (Boston Herald, October 8, 1918) 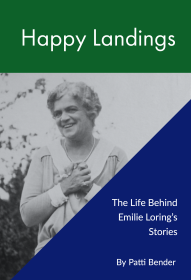 Within two years, influenza killed between twenty and forty million people worldwide, the deadliest pandemic in history. In America, one-fourth of the population contracted the disease, and 675,000 died–twelve times the number of American soldiers that were killed in battle overseas.

Living in close quarters, the influenza rate in military camps was higher than for civilians. “It ultimately killed more American military personnel than did enemy machine guns and artillery.”

I’ve read Emilie Loring’s novels throughout life’s phases, changes, and challenges. Each time I do, I see the lines I need for the moment. 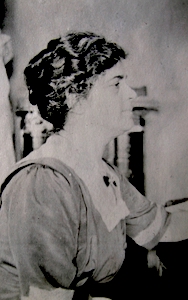 “I cannot afford to worry.  I need every ounce of strength, thought and courage I possess to solve my problems.”  The Mother in the Home

“Wouldn’t it be marvelous if only for this one night all the heartaches, crimes, quarrels, and sickness would stop and for twelve hours give to everyone in the world a sense of peace?”  Beckoning Trails

She would try to remember the next time she was worried, that there was a gate in every wall, that nothing hurts forever, that problems have a marvelous, unbelievable way of straightening out.  Lighted Windows

As I take action to limit the spread of coronavirus in my community, I remember that Emilie Loring, like my grandparents, took the action her moment in history required.

“What you could do, your descendant many generations removed can do.  Watch her, that’s all, just watch her go on!”  With Banners