When I was in school, the yearbook put girls’ and boys’ pictures in separate sections, and I never thought about it. I went to a university that had no coed dorms and had the men’s and women’s dorms on opposite sides of the campus. I accepted that, too; I was used to being segregated by gender expectations, roles, and rules.

Would I have wanted coed dorms at the time? I remember talking about it with my suite-mates. Although we sometimes wanted to have guys over on weekends, we were glad we could go out into the halls without doing our hair first, or dash down to the vending machines in our jammies.

Both of my children attended colleges with coed dorms. It was no big deal. It seemed normal to me, too, when I visited. Things change, and we change with them.

I’m thinking about this, because I came across an issue that was current in Emilie Loring’s lifetime, and I had a hard time getting my head around it.

Why wouldn’t women want to vote?

In the immediate aftermath of the Civil War, voting rights were extended to African-American men, but not to women of any origin. The first suffragist movements started at the same time as the abolitionist movement, and Emilie’s father, George Melville Baker,  supported both.

He wrote “Shall Our Mothers Vote?” when Emilie was ten. Two boys debate, and one says:

“Who have governed the greatest men that ever lived?  Mothers… They spur us on to excel, and guard our ways with good counsel. Give them the ballot, and their influence will make better laws.”

“Mothers govern us until we are free; once free, ‘tis man’s privilege to govern them, and I am not in favor of giving up one iota of our manly privileges, when we get them.”

The play ends with a vote, and the “ayes” have it. At age ten, forty-three years before the Nineteenth Amendment, Emilie knew that her father supported her right to vote. He would not live to see it.

Fast-forward to the 1910s when “Votes for Women” was again the battle cry in the United States and Britain. This was the time of the “sister suffragettes,” like the ones in “Mary Poppins:”

Cast off the shackles of yesterday.

Shoulder-to-shoulder, into the fray.

Our daughters’ daughters will adore us, and they’ll sing in grateful chorus,

But there was another side, and it found strong support in New England. Here is a brochure from the National Association OPPOSED to Woman Suffrage. 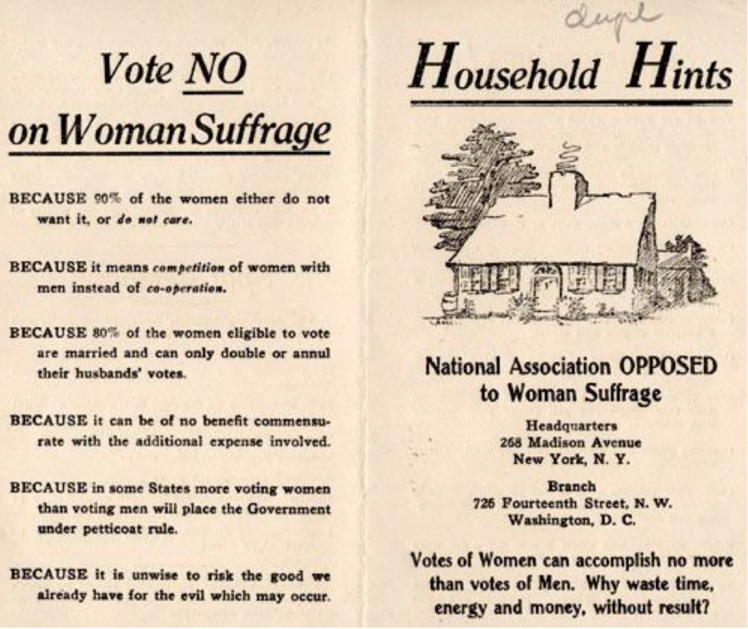 On the reverse were household tips, including these:

You do not need a ballot to clean out your sink spout. A handful of potash and some boiling water is quicker and cheaper.

Control of the temper makes a happier home than control of elections.

Why vote for pure food laws, when your husband does that, while you can purify your ice-box with saleratus water?

Sour milk removes ink spots. There is, however, no method known by which mud-stained reputations may be cleansed after bitter political campaigns.

To understate a point, these would not land well in today’s civic discussions.  🙂

The Nineteenth Amendment had passed before Emilie Loring published her first novel. Throughout her career, she wrote about the power of the vote and urged all to use it.

“Whichever way your convictions lead you, don’t fail to vote.  This country needs every thinking citizen at the polls.  Too many ignore the voting privilege.  Especially it needs the women.  There is a tremendous field opening for them in government house-keeping.” As Long As I Live (1937)

But many smart, independent women had been on the anti-suffrage side, including my favorite of Emilie’s writing colleagues, Sara Ware Bassett. Her spunky characters act on their convictions, even when they have to oppose tradition or someone in power. They also have “the saving grace of humor,” as Emilie would say, and I appreciate that.

So imagine my surprise and consternation when I discovered that she described herself as an anti-suffragist. Why, Sara Ware, why?!

One argument of the time was that men and women were already equal, but in different spheres of power. Men controlled the public and political arena; women ruled over private and domestic life.  James Trafford expressed this idea to Julie Lorraine, in Here Comes the Sun! but she wasn’t having it:

“I want to do something to help my country.”

“Then keep out of politics yourself and make a home for some embryo politician which will keep his ideas and ideals up to the mark.  You’ve got the biggest chance in the world right there.  Blessed are the home-makers for they shall inherit the earth,” he paraphrased gravely.

“That remark smacks of the vintage of ’76.  Poor old Rip Van Winkle!  Has he been asleep for the last twenty years?”

Another was that women were not academically prepared for politics.  Emilie’s generation was the first to have grammar schools open to both boys and girls, and that was in education-oriented Boston. Girls prepared for motherhood and housekeeping; how could they responsibly debate political topics? Rose Grahame had one answer in The Solitary Horseman:

“Most of us women have to consider the dollar.  We are trained to that much more than are men. There is criticism of the few women who are filling political offices in the country.  Is there any reason why the woman whom we propose couldn’t make good? Let’s elect her and see that she does make good.”  The Solitary Horseman 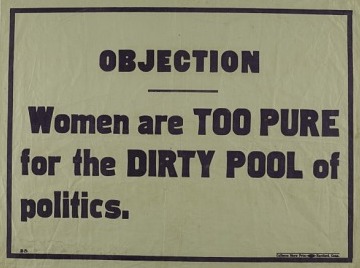 There was also a sense that “true womanhood” would be destroyed, if women competed equally with men in the public sphere. Education, voting, physical exercise, entering the work-force… Each time women advanced into a male-dominated area, there was a fear that they would lose their “femininity.” As Long As I Live‘s Joan Crofton balanced business and fashion sense to her advantage:

Chestnut hair, natural wave, nice hairline, area from cheekbone to ear commended by artists, a bit of slant to deep blue eyes alight with warmth and sparkle, lashes long, dark, gold-tipped, plenty of color in cheeks and lips—she was glad now that she had decided against make up.  On the whole, clean-cut type.  Lucky that an inner voice had urged her to wear her most swanky hat.  Early in her business career she had discovered that the average man is susceptible to feminine headgear and shoes. As Long As I Live

I disagree with websites that call Emilie’s sister, Rachel Baker Gale, an anti-suffragist. Her plays poked fun at the extremes people go to when they want something, from higher wages to greater self-determination to equality in relationships between men and women. Hers was playful humor, and the original desire went unassailed. In “Wigs on the Green,” it was votes for women.

“Now is the appointed time. It is the hour to strike for freedom! To be man’s equal! Aye, his superior. At the ballot—at the polls—North or South—it does not matter which—at home—abroad—and from the Alleghenies on the East—to the Rockies on the West—we will plant our flag—emblem of the achievement of women!”

In “Coats and Petticoats,” a man and woman impersonate each other, and all manner of silliness occurs, until they get back on track as themselves and support equal suffrage with a song:

We are the suffragettes, know us by our badge of yellow,

We do not stew and fret, each one a jolly fellow.

No more to sew, to brew, to bake. In other ways we’ll take the cake.

We’ll be the presidents of our land, and show the men we have some sand.

Like yearbooks and dorm rooms, I have a fresh awareness that the suffrage we take for granted now was a question during Emilie’s life, and reasonable people, including her friends, disagreed about what its effects might be.

Now, it has been the law for one hundred years, and it still takes the efforts of all citizens. I’m sure Emilie would support me in saying, let’s be sure we register and vote. Let’s help others to register and vote, also.

Start early and avoid the rush.

“Whichever way your convictions lead you, don’t fail to vote.

This country needs every thinking citizen at the polls.”

3 thoughts on “Why Wouldn’t a Woman Want to Vote?”