How often do you see something with fresh eyes, notice something you hadn’t seen before? It’s a simple thing, but it’s been happening a lot since my husband and I both got new cameras. We walk the same green-belt path near our house day after day, week after week, but all of a sudden, we’re noticing colors and textures and details with new appreciation.

When things are familiar, we can overlook much about them. Our surroundings become routine, and we as much expect what is around us as see it.

I wrote last week about how lovely it is to pick up a much-loved story and re-read it to enjoy the familiar scenes and dialogue and plot. (See: The Personal Patina of Book Collections)

There is another way to enjoy familiar books, though, and that is to do as my husband and I have been doing on our walks–see them with fresh eyes. I was reminded of this when Peggy commented about re-reading Beckoning Trails:

“I had forgotten how fun this book is with the mystery and all kinds of suspects, action packed, full of snappy dialogue, and frequent interaction between Deb and Tim. They are very companionable. I assume that Emilie Loring is channeling herself through Molly B. There is much discussion among characters of the process of writing and revealing clues/knowledge about the mystery at hand. This is a much more active novel than, say, High of Heart, which was my previous read last week. It’s neat to see the relationship and bond grow between Debby and Tim over the novel. It establishes a good foundation for their coming together in the end.

“It just goes to show that there is much more than “formula” to her novels. Yes, there are some fundamental elements in each book, but I would call High of Heart a pensive novel–on the issue of one’s identity, family, culture and nationality. Further, as you’ve written elsewhere, Swift Water is an even different novel, with the very intense internal spiritual and emotional struggles of Jean Randolph. But that had lots of action and some intense, steamy scenes full of possibilities between Jean and Rev Chris. Some novels are rollicking, or have rollicking elements, that call to mind the “screwball comedies” or the mystery/action films of the same era. (eg, the midnight ride to Nogi’s to see “esteemed relative” in Gay Courage, which also has some steam between Goeffrey and Nancy–his obsession w/the base of her throat. Whoa! EL knew how to create steam with nothing more than a kiss, but an intense kiss.)”

I entirely agree that “there is much more than formula” to Emilie Loring’s novels. And yet, Emilie Loring’s sons and the ghostwriter Elinore Denniston proceeded very much according to formula when they created the later books. They created a list of story elements, locations, and plot complications that she had used. They listed names already used in the books. They listed partial stories to use as starters and fillers.

The cobbled-together stories were similar, in truth, to Emilie Loring’s works, but in the way of copied paintings or forged signatures. They passed muster for the publisher and were entertaining in their own right, but they fell short of what Emilie Loring would have written.

A formula can copy structural elements, but it can’t supply the art and soul of a story. It doesn’t make “rollicking” action or create “steam.” Those come from the character and artistry of the author, who makes the page come alive, who triggers the reader’s attention, imagination, and reflection.

I wrote about my failed effort to write like Emilie Loring in No Formula Could Produce These Stories.  At eighteen, I was more immersed in her stories than I was aware of the craft that created them.

I wonder about Emilie’s sons, who were in their late twenties when their mother wrote The Trail of Conflict and in their late fifties when they took over her copyright.  Did they ever read their mother’s books with enough attention to truly know her writing? Were her stories so familiar that they failed to see them with fresh eyes?

Happily, we can always pick up an Emilie Loring story and read it anew. When I want to see with fresh eyes, I have found that it helps to switch from the paperbacks to the hardbacks. I only read the paperbacks for years, so I know where on the page certain pages of dialogue appear, automatically skim over parts of pages that are too close to something exciting that I know is coming. 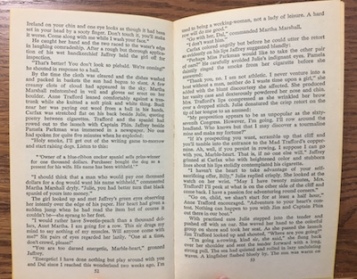 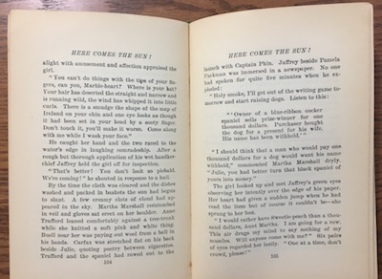 I hadn’t realized it before, but the paperbacks are about twice as dense as the hardbacks. Here Comes the Sun‘s ad for the “Owner of a blue-ribbon cocker spaniel” is on page 52 of my paperback and page 105 of the first edition hardback.

The story feels new when it’s arranged on the page differently, and I find I read each word with more care. Those are the benefits of both novelty and extra white space on the page. New sentences capture my attention, and dialogues seem spontaneous again. Plus, with a hardback, I read the story more as Emilie would have read it herself; she never saw a paperback Emilie Loring book.

Try the experiment yourself. Read a different format, or change something else to give yourself the opportunity to read with fresh eyes. After many readings of Emilie Loring’s books, it’s fun to think that they could all seem new again!

10 thoughts on “Reading With Fresh Eyes”