I have been traveling the last week or so and have just returned to my desk, my books, and my notes. My mother is staying with me awhile, so what better time to consider Emilie Loring’s second book, The Mother in the Home?

Like her first, For the Comfort of the Family: A Vacation Experiment, this book is a collection of articles that had already been published in Mother’s Magazine, American Motherhood, Woman’s Magazine, Holland’s Magazine, American, and St. Nicholas. Some of the best-known authors and public figures wrote for these magazines. For example, Edna Ferber, Booth Tarkington, Kathleen Norris, and Douglas Fairbanks, Sr. all wrote for The American Magazine around the same time that Emilie–that is, Josephine Story–did. And it’s safe to say that Emilie grew up with St. Nicholas, a magazine of children’s stories that started when she was seven.

Take a look at these old magazines online sometime. They are entertaining mini-museums! When I read the caption for this illustration in the January 1917 issue of The American Magazine, I wondered if something like it had planted the seed for Emilie’s first, book-length novel, The Trail of Conflict: “The bride proved her genuine worth by working in the ranch-house, not at all like a pampered child of the effete east, but like a real rancher’s wife.”

I so want to read the rest of this one:

Emilie’s sons were in their early twenties when The Mother in the Home was published in 1917. In fact, both men were in uniform–Robert at Camp Dix in New Jersey, and Selden at the front-of-fronts in France. With the distance of time, Emilie advised young mothers on twenty aspects of efficient and effective motherhood, always with the appreciation of Daniel Webster, who provided the book’s dedication:

“They work, not upon the canvas that shall perish, or the marble that shall crumble into dust, but upon mind, upon spirit which is to last forever and which is to bear, for good or evil, throughout its duration the impress of a mother’s plastic hand.”  Daniel Webster

This is the one Emilie Loring/Josephine Story book that I don’t have in its original form. I made a photocopy of it at the Library of Congress, though, and I can share some excerpts here, on the blog.

I’ll start with “The Conservation of Mothers.” The title was a take-off on “The Conservation of Children,” written by Charles Gilmore Kerley, who was a pediatrician and the husband of Emilie’s good friend Beth Kerley. If you’re of an age to remember the old, Palmolive soap commercials, you may smile, as I did, at receiving advice from “Madge.”

“Woman’s rights!” exclaimed Madge Jarvis in her sweet voice, “I can’t express an opinion on woman’s rights, but I have very decided convictions as to the rights of mothers.”

“Give them to us, Madge,” we commanded.

We always dropped our sewing when Madge expressed her views, for she spoke as one having authority. She was older than many of us and had lived at a distance for years. We admired her tremendously and in our hearts were, perhaps, a bit lovingly covetous of the very palpable adoration bestowed upon her by her husband and children.

“Very well, then, here’s my experience with mother’s rights. It may help some of you with your problems. When my first baby was a year old he had a severe cold. I had tried all the remedies I knew and was tense with apprehension when the physician arrived.

“He looked at the baby, then at me; he had known me all my life, ‘That little duffer is all right. Look here, Madge Jarvis, relax. Suppose the kiddie has a cold? It isn’t a tragedy. You’re the one who needs attention,’ he growled.

“‘I do not count, Doctor, as long as the baby is well,’ I protested.

“‘You count to Jack, don’t you? he persisted. ‘That’s an illustration of the lop-sided view you mothers take. The moment the baby comes your husband’s right and claim to consideration is lost sight of. Woman, don’t you realize that the most important person in this house to be kept well is you, you, you? Aren’t you wife, mother, nurse, housekeeper, teacher, mistress of the exchequer and all the other things which contribute to the making of the home? You’re the dynamo. Greater still, the sunshine in whose light all the living things in a home grow and flourish. Now, my lady, think it over,’ and he was gone.

“Think it over! I should say I did. My conscience still smarted and stung from that reference to my husband. I had pushed Jack aside in my interest in the baby. I studied my reflection in the mirror. Could the woman who confronted me, with hair disheveled, brows wrinkled in worried thought, lips drooping at the corners, by any chance hold the high place to which her husband had raised her in his heart and life?

“‘You’re not big enough for your job,’ I confided to the looking-glass woman in dismayed disgust.

“From that moment I began to think. Not the futile thinking which goes round and round in a circle and never progresses, but the good, constructive variety which results in definite plans. Jack helped, for when I poured out my heart to him he responded with his point of view.

“We made a schedule ‘FOR THE CONSERVATION OF MOTHER,’–as we laughingly dubbed it. Of course, as the children came and grew older, it had to be readjusted, but, oh, how well it worked. In spite of the ever-present temptation weakly to set the children’s pleasure before my necessity and so contribute to making them selfish and inconsiderate, I have managed to stand firm and cling to the schedule. Oftentimes, however, I humbly acknowledge, only because my good man at my elbow kept me from backsliding. Just an example of what sympathetic co-operation between husband and wife can accomplish.

“Every day I took an hour’s rest after luncheon. I shut myself in my room. I made myself lie down. The more impossible it seemed for me to take the time, the greater I knew my need of relaxation to be. Even the babies grew to respect that hour. I have heard a tiny tot outside my door whisper a warning which would have aroused the seven sleepers.

“When friends telephoned or called they were informed that Mrs. Jarvis would not be at liberty till three o’clock. In time they became accustomed to my program and respected it. Of course there were some feelings hurt in the process of establishing my rights, but if I had not the strength of character to conserve my strength, who would do it for me?

“Twice a year Jack and I took a little journey by ourselves. Sometimes it was difficult to find the right person with whom to leave the children, but I persevered and in the end was invariably successful. How those vacations helped! We both came back refreshed, our point of view changed and ready to take up our respective jobs with renewed enthusiasm.

“One evening each week we devoted to fun and each other. I would meet Jack in the city, we would dine together, then go to a theatre or concert. The lean years have been many, but we have stuck to our program, adjusting the expenditure for our little outings to meet the purse. There are always free lectures somewhere; good pictures or a bit of music. Now there are the movies to give the brain-fagged, problem-logged home-maker rest and inspiration. Each week I have had an afternoon at home for my intimate friends. One of the children, boy or girl, prepared the tea-tray and took the care of serving.

“The hardest thing I have had to do has been to have even my simple wardrobe when there were so many, many things I wanted to buy for my boys and girls. On that point Jack stood like a rock.

“‘The children have years before them in which to receive and acquire,’ he argued. ‘You need the tonic which the consciousness of feeling properly and attractively dressed gives,  to help you shoulder a mother’s manifold perplexities.’

I have avoided expending my mental strength and nervous energy playing cards. The time other women have spent in that way I have devoted to cultivating my power of concentration and broadening my outlook by reading.

“Until a year ago, when the youngest of the four children went to High School, I have never served on committees or in clubs. I felt that the mother of a family should have nothing which she must do outside her home while the young people were growing up. Home-making requires poise, and poise comes from unhurried, unhysterical judgment. The woman who is flurried and harassed by outside interests cannot meet the problems of her husband and children with inspiring cheeriness. She is rather sure to run her domestic ship on the reef of nervous irritability.

“Now that my flock has tried its wings I am revelling [sic] in all sorts of projects and Jack applauds and urges me on. I can do it with an absolutely clear conscience because, in the years when they most needed it, I gave to my own my very best. I conserved my strength, happiness and cheeriness for the good of the family. Can any mother really question the wisdom of that?” she asked with her radiant smile.

Here is the table of contents for The Mother in the Home. If you’d like to read another article  in a future post, let me know which to choose in the comment section below! 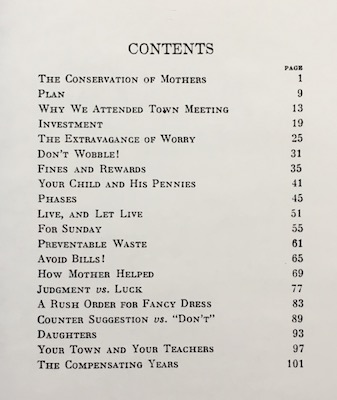 8 thoughts on “On the Conservation of Mothers, An Excerpt”