When Emilie Loring achieved best-seller status, she had ads in the New York Times and book-signing events at major department stores in Boston and New York.  Independent booksellers published weekly newsletters for their customers with reviews of her books and short articles that she wrote for the purpose and sent to outlets across the country.  (Thank heaven, I don’t need to mail these posts to each of you, independently!)

Emilie Loring wrote this piece about her titles in 1934, a strategic way to remind book-buyers of not only her current book but the others still available for purchase.

Recently a writer said to me: “I’ve reached the last chapter of my novel and I haven’t a name for it. How do you get your titles?”

I passed the question on to my memory and immediately that trusty informed me as to how my literary children had been named. 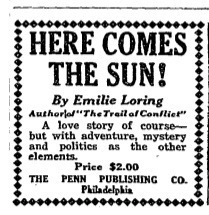 I remembered that while writing my second novel I had stopped work to watch patches of bright blue break up the pattern of clouds outside my window and that I had exclaimed: “Here Comes the Sun!” As quickly as letters scuttle into place on the silver screen to form a caption, so quickly did my imagination blaze those four words across the title page of my story. The novel was named.

The words, “The Solitary Horseman” stood out sharply from the first page of The Talisman when I opened the book by chance. “The perfect title for my story,” I thought.

Gay courage kept a friend’s leaky financial boat afloat and brought it safely into port when grim courage might have wrecked it. “Gay Courage.” The two words fitted to perfection the story upon which I was at work, the story of a lovely girl whose courage and gayety of spirit buoyed her family through the rough and tempestuous seas of heartbreak and disillusion.

The lighted windows in a log house in an Alaskan wilderness welcomed a young engineer as he returned with his dog team from a frigid, perilous journey. “Lighted Windows” glowed into a title for a story whose genesis was a Lost and Found advertisement: “Lost: black satin slipper with rhinestone buckle.”

During the late, if not lamented, bank holiday, depositors were notified that on a certain day the munificent sum of ten dollars might be drawn from each account. When I entered the bank I was amazed by the atmosphere of cheer. The crowded room seemed like an afternoon tea running on eight cylinders. Everyone was gay, everyone was laughing and chatting. I thought:

“This is a flame of the spirit which dared the wilderness, which sent descendants of the pioneers across the prairies in covered wagons, which urged them on to the adventure on unknown rivers and seas, the spirit on which American character was built.” Into my mind flashed, “We Ride the Gale!” “There’s the title for the novel I’m writing now,” I told myself, and sure enough it was.